NYPD: Man Raped One Woman And Tried To Rape Another On Washington Bridge

A man raped a woman on a bridge between Manhattan and the Bronx last month, according to police, who say the same man tried to rape another woman on the same bridge in February. Now police have released a surveillance image and a sketch of the suspect in hopes that the public can help identify him.

The attempted rape happened on February 20th, around 12:30 a.m., when a 26-year-old woman was walking towards Manhattan on the Washington Bridge, which spans the Harlem River, connecting the Bronx and Washington Heights. Police say the victim was approached by a man who "displayed a knife" and "demanded money, before placing his hand inside of her pants." The man then fled west on West 181st Street.

The victim was treated at a nearby hospital.

On August 25th, around 1:30 a.m., a 20-year-old woman was walking towards Manhattan on Washington Bridge when the same suspect approached her, according to the NYPD. The man allegedly "simulated a weapon by his waistband, demanding money... went through her bag, raped her on the ground and fled northbound on University Avenue."

The second victim was treated at an area hospital. 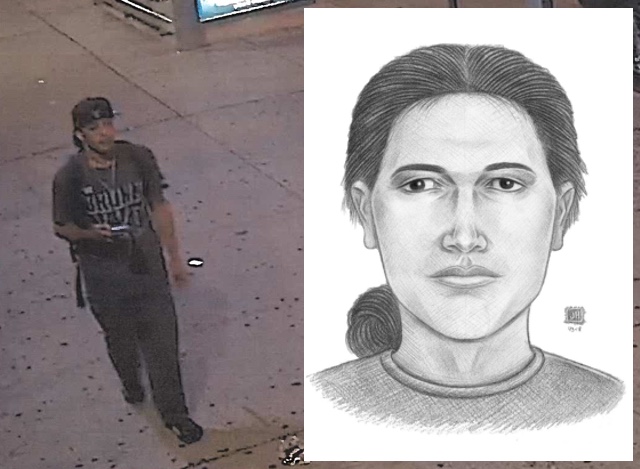 Surveillance image and police sketch of the suspect (NYPD)

Police describe the suspect as a male who is about 5'1" and has a pony-tail. He was last seen wearing a dark gray shirt, baseball cap, dark pants and dark sneakers. They also released a surveillance image of the suspect from 1522 University Avenue, and a police sketch.

Anyone with information regarding this incident is asked to call Crime Stoppers at 1-800-577-TIPS (8477). The public can also submit tips by logging onto the Crime Stoppers website at WWW.NYPDCRIMESTOPPERS.COM or by texting their tips to 274637 (CRIMES) then enter TIP577.