NYPD: Man Invited Woman To Hotel Room, Where She Stole His $18K Rolex

Stranger danger: A man woke up in his Manhattan hotel room to find the woman he invited up gone... as well as his $18,000 watch. Now police have released surveillance images of the woman, who is now wanted for grand larceny. 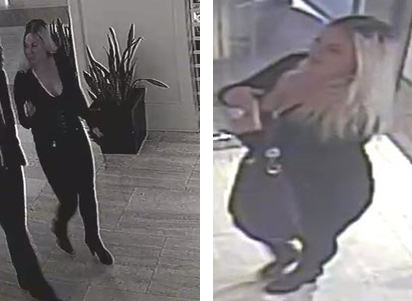 The incident occurred on November 3, when according to the NYPD, the victim, a 33-year-old man, met the female suspect at Faces & Names around 1:20 a.m. He invited her to his room at the Park Central Hotel, a few blocks away from the bar, and police say, "The victim and unidentified male proceeded to the hotel room a short time later."

When the man woke up at 10 a.m., he "discovered that the unidentified female was gone and that his Rolex watch valued at $18,000 had been removed from his wrist."

The suspect is described as having medium-length blonde hair and was last seen wearing black pants, a black top and carrying a black purse. The photos are from the hotel, while the video is from Faces & Names:

Stealing expensive watches from sleeping men is nothing new.

#grand larceny
#manhattan
#park central hotel
#rolex
Do you know the scoop? Comment below or Send us a Tip