A man who was being escorted out of a Bronx deli by police officers grabbed one of the cops' guns and fatally shot a deli worker early this morning. The other officer fired his gun, wounding the suspect.

The incident occurred at A&M Deli at 230 East 198th Street at the corner of Valentine Avenue around 1 a.m. today. Two officers responded to the scene, where two deli workers were in an altercation with a third man, 30-year-old Efraim Guzman. NYPD Assistant Chief Larry Nikunen, Commanding Officer of Patrol Borough Bronx, described a "physical struggle" between the workers and Guzman.

Apparently Guzman was trying to sell phone chargers, and had been kicked out of another store by the 49-year-old deli worker. When Guzman went to A&M Deli, the deli worker followed, reportedly warning employees there "that Guzman was up to no good."

"Their argument became so heated that several 911 calls were made and witnesses flagged down two patrolling NYPD officers, who found the pair brawling," the Daily News reports.

One police official said, "Guzman made a very fast move and basically ripped the gun out of the officer's holster."

The 49-year-old deli worker died at St. Barnabas, which is where Guzman was also taken. 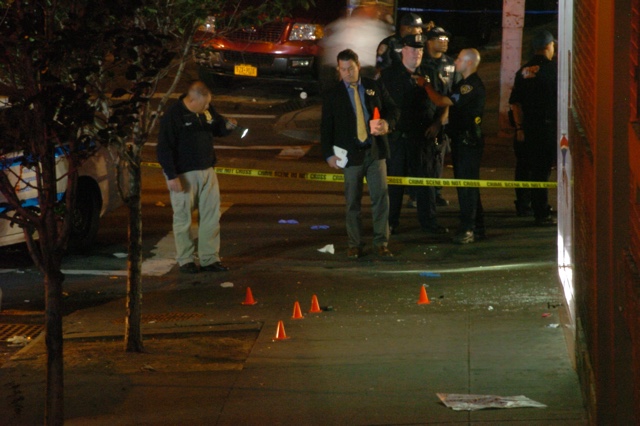 Police at the scene (David Torres)

As many as 15 shots may have been fired during the incident. Surveillance footage reportedly backs up the police version of events.

The News adds, "It’s unclear how Guzman managed to swipe the firearm or if he aimed it at the officers, but cops are investigating the incident" because the holster apparently needs to be unclasped before the gun can be removed.

#bronx
#fatal shooting
#gun violence
#police involved shooting
Do you know the scoop? Comment below or Send us a Tip