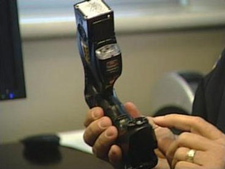 The New York Police Department intends to begin arming sergeants with Taser stun guns, which shoot a pair of electrodes at an intended target and disburses a disabling electric charge. The expressed purpose of the move is to try to prevent life-ending incidents where police are forced to shoot non-compliant citizens with bullets.

Tasers have been available to NYPD sergeants since 1984, but their bulky design required that the non-lethal weapons be stored in the trunk of police cars, inhibiting their usefulness. Design improvements made the Taser more portable and now sergeants will be carrying them on their hips. Up until now, only the Emergency Services Unit has had ready access to Tasers as a combative tool, because of their training with special weapons. Now, 3,500 patrol sergeants will be wearing them on their belt.

The Tasers will be always placed on the opposite side of a sergeant's hip as his or her pistol, to reduce confusion in the heated moments of a potentially fatal confrontation. Sometimes those types of situations can lead to a level of confusion that "left vs. right" should eliminate.

Tasers can be an effective use of non-lethal law enforcement tactics. As made famous by a privately taped exchange between an obnoxious college student and a Presidential nominee, one can see that whereas a life-endangering gunshot to the head of a persistent gadfly would have been quicker, the drawn-out and repeated Tasering of the young man resulted in a happier resolution for everyone.