NYPD Light Tower Has Been Blocking Brooklyn Bike Lane For Weeks Because Where Else Could It Possibly Go?

An NYPD light tower has been planted in the Kent Avenue bike lane at Hooper Street for the last two weeks, according to cyclists who frequent the route. The two-way lane, a major route to-and-from Williamsburg for North Brooklyn bike commuters, passes through an industrial area frequented by trucks, if not pedestrians. 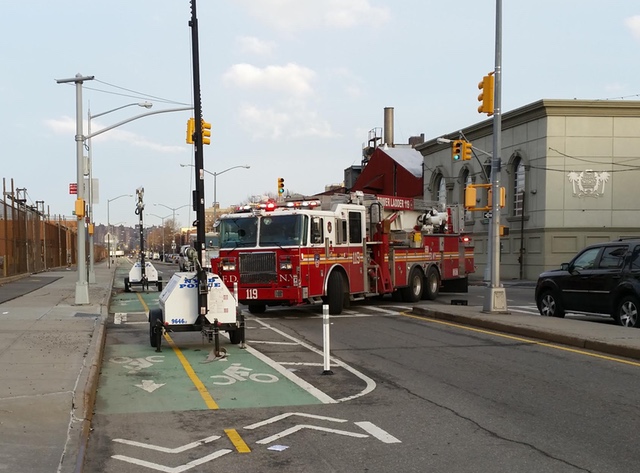 "It's kinda Brooklyn's bike highway," said Park Slope cycling advocate Doug Gordon (a.k.a. Brooklyn Spoke) of the Kent lane. "When something is obstructing a two-way bike lane, you have to go into traffic or onto the sidewalk to get around the thing."

The intersection, which falls in the NYPD's 90th Precinct, has not seen any crime incidents since January 1st, according to the NYPD's CompStat 2.0 map, which updates weekly and maps the week's crimes down to the nearest intersection. A felony assault was documented a few blocks north at the corner of Wythe and Wilson in January, and two grand larceny incidents took place at nearby Clymer and Wythe in early February.

According to NYPD crash data, there was one documented car crash at the intersection of Kent and Hooper last month, involving a pick up truck and a station wagon. There were no reported injuries.

Gothamist editor and Williamsburg resident John Del Signore says he's been forced to bike onto the sidewalk to avoid the light tower during his morning and evening commutes for the past few weeks. He pointed out that, though not ideal, sidewalk jumping is a relatively safe option in an industrial neighborhood without many pedestrians. The alternative is more harrowing. "There's just narrow space between the gnarly rush hour traffic and that NYPD thing," he said.

[Editor's note: For the record, I did not assign this to Emma; she asked me about it after seeing Bahij Chancey's tweet above. I would never use Gothamist for some personal vendetta against the hostile forces at play in my daily commute... Okay, maybe ONE time. ]

#Hooper Street
#kent avenue
#Kent Avenue Bike Lane
#williamsburg
Do you know the scoop? Comment below or Send us a Tip