A pair of burglars have been targeting basement laundry rooms to steal money from the coin machines, according to police who say four Brooklyn apartment buildings in Bushwick and Bedford-Stuyvesant were struck between January 9th and January 14th.

The first incident was on January 9th, between 5 p.m. and 5:15 p.m. According to the NYPD, "the individuals entered a residential apartment building in the vicinity of Bushwick Avenue and Palmetto Street through the front door by unknown means. They then proceeded to the laundry room in the basement where they used an unknown tool to break into the change machine. They removed approximately $10 in cash before fleeing."

Four days later, on January 13th, between 5:18 and 5:25 p.m., the pair allegedly got into a apartment building near Kosciuszko Street and Nostrand Avenue "by unknown means," and then "proceeded to the laundry room in the basement where they used an unknown tool to break into the change machine," according to the NYPD. And there was about $1,000 in the machine!

On January 14th, between 4 p.m. and 4:16 p.m., police say the two suspects entered a residential apartment building near Evergreen Avenue and Myrtle Avenue "by breaking the front door lock. They then proceeded to an office inside the basement where they used an unknown tool to break into the change machine," where they took about $2,000 in cash.

Minutes later, between 4:20 p.m. and 4:30 p.m., the suspects allegedly entered another building, this time near Broadway and Stuyvesant Avenue, "by using an unknown tool to gain entry" and managed to break the change machine, taking $100 in cash, according to police.

One suspect is described as a man who was last seen wearing a New York Yankees jacket with hood, a hat, dark colored jeans, and two toned sneakers, while the other is a man with a beard and at least one earring, who was last seen wearing a black jacket with the number "67" on the left breast pocket, dark colored jeans, white and black sneakers, and a black hat with yellow lettering. 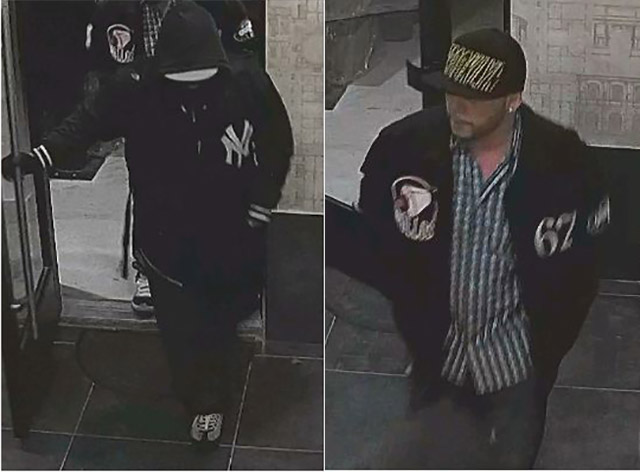 Anyone with information in regard to these incidents is asked to call the NYPD's Crime Stoppers Hotline at 1-800-577-TIPS (8477) or for Spanish, 1-888-57-PISTA (74782). The public can also submit their tips by logging onto the CrimeStoppers website at WWW.NYPDCRIMESTOPPERS.COM, on Twitter @NYPDTips or by texting their tips to 274637 (CRIMES) then enter TIP577.

#burglary pattern
#change machine
#coin machine
#laundry room
Do you know the scoop? Comment below or Send us a Tip