This morning at 1 Police Plaza, City Council Speaker Christine Quinn and NYPD Commissioner Ray Kelly announced a new citywide campaign to combat domestic violence. Beginning today, advertisements will be displayed on bus shelters, phone kiosks, and newsstands across the five boroughs in English, Spanish, and Russian. The objective of these ads, not unlike the familiar "If You See Something, Say Something" posters found throughout the subway system, is to encourage New Yorkers to speak up if they suspect a family member, friend, coworker or neighbor is the victim of domestic violence. “Silence is an accomplice of domestic violence,” said the police commissioner. “That’s why people should heed the message of this campaign, ‘Don’t mind your own business.’”

Although domestic violence occurs throughout New York, the campaign—which will run for the next two months, funded by NYC & Company—focuses on neighborhoods with a particularly high number of complaints related to domestic violence, beginning with Bedford-Stuyvesant, Sheepshead Bay, Manhattan Beach, Brighton Beach, Parkchester, St. Albans, Elmhurst, and Jackson Heights.

Yolanda Jimenez, Commissioner of the Mayor's Office to Combat Domestic Violence, cited findings from recent polls that suggest a staggering number of domestic violence incidents go unreported in NYC. Nearly 60 percent of those surveyed, she said, knew someone who had been the victim of domestic violence in the past year whereas only 30 percent knew how to get help for those victims. Three family justice centers in the Bronx, Queens, and Brooklyn offer a myriad of services regardless of the language victims speak or their immigration status. Immigration attorneys are available to help secure U visas and T visas, which provide temporary legal status for victims of crimes and human trafficking respectively. 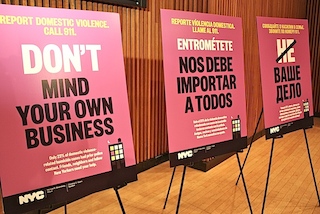 Signs will be posted at bus shelters, phone kiosks, and newsstands throughout the city. (James Thilman / Gothamist)

"Too often incidents of domestic violence go unreported until it is too late and the violence has escalated to the point of murder," said Quinn. "We're asking new yorkers to do what they do best: as it relates to domestic violence, they need to speak up." The campaign encourages New Yorkers to call the NYPD rather than intervene directly.

While reports of domestic violence are on the rise—the NYPD reports that there were 257,813 domestic violence incidents in the city in 2011— the police commissioner once again touted New York as the "safest big city in America," crediting the NYPD and Mayor Bloomberg for drastic decreases in crime over the past decade. "This is the 129th day of the year, so far we've had 127 murders in New York City." While nearly one murder per day might seem high, it's actually 19 percent lower than the same period last year, and on track to beat a record low established in 2009.

The NYPD is ramping up their efforts, emphasizing the need to preserve electronic evidence such as email and voice messages so that even with a victim reluctant to prosecute, the district attorney can still move forward. Additionally, Kelly has assigned 32 additional sergeants to a domestic violence task force and will increase home visits to deter subsequent attacks by an abusive partner. Last year, the NYPD made 73,000 visits to the homes of domestic violence victims.

Kelly likened the "Don't Mind Your Business" campaign to similar advertisements designed to reach out to victims of sexual abuse. "Rape was commonly unreported when the assailant was a family member or acquaintance, now they're routinely identified and represent 91 percent of all rape suspects. There is a great advantage to ending any stigma attached to the victim and advertising can go a long way in that regard," said Kelly.

Quinn finished with a stern warning for domestic abusers and reassurance for their victims: "Domestic violence is not and will not be tolerated in the five boroughs and if you are the person perpetrating it, the police will focus on you, they'll apprehend you, and you will be prosecuted to the full extent of the law. And if you are the victim, the NYPD is here to support you and to serve you, as well as a network of city services and advocates who can stand with you on your steps to becoming a survivor and model for other people."

#christine quinn
#domestic violence
#Don't Mind Your own business
#murder
#nyc & company
#nypd
#Ray Kelly
#yolanda jimenez
Do you know the scoop? Comment below or Send us a Tip