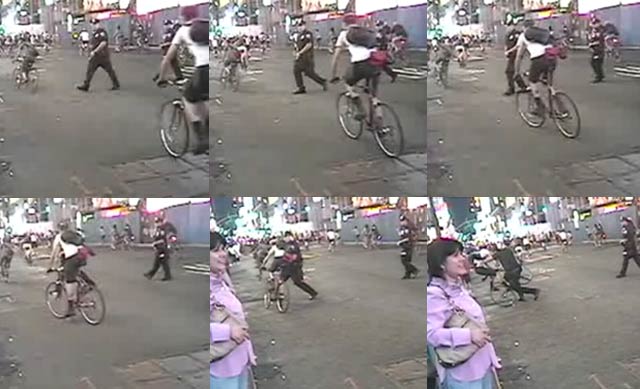 The cyclist who was videotaped being body slammed off his bike in an apparently unprovoked attack by an NYPD officer during Friday night’s Critical Mass ride has been identified as Christopher Long, a 29-year-old resident of Bloomfield, New Jersey who works at the Union Square Greenmarket. His boss tells the Daily News that Long is an Army veteran and "mild-mannered environmental activist." Craig Radhuber, 54, was riding behind Long Friday night and describes incident: “All of a sudden the cop picked this kid out and bodychecked him. I couldn't believe what was going on. [The officer] body-slammed this kid off the bicycle so hard that he went from the lane to the curb.”

The officer seen in the video, rookie Patrick Pogan – a third-generation cop and the son of a retired New York City detective who worked on the Joint Terrorism Task Force – wrote in his police report that Long was observed “forcing multiple vehicles to stop abruptly or change their direction to avoid a collision.” Radhuber, the witness, tells the Times that “there was no traffic behind us – there was no traffic to weave in and out of. The police officer looked to see who he was going to pick off.”

According to Officer Pogan, Long rode his bike straight into him, knocking them both down and causing a “laceration” on his arm. This account would seem to contradict the incendiary video, shot by a tourist. Long was arrested for attempted assault, resisting arrest and disorderly conduct, and, apparently Officer Pogan wrote in his report that Long told him: “You are pawns in the game. I’m going to have your job.”

Bill DiPaola, a director of Time’s Up, told the Times he arrived just after Long went down. “He got up and was dazed. They put their knees on top of his head and were smashing him into a phone booth.” Long, who was not wearing a helmet, was bruised but not hospitalized, and spent 26 hours in jail. After the video surfaced yesterday, Pogan was stripped of his gun and badge pending an investigation. But his father defended him to the Daily News, saying, “You gotta do what you gotta do to make an arrest.” And in discussing the video with the News, an unidentified NYPD source says, "The video is bad - what can you say?" (Watch it after the jump.)

It's been almost four years since Critical Mass bicyclists and the NYPD clashed during the 2004 Republican National Convention (cops arrested over 200 people). Since then, the city and bicyclists have argued over whether the "unorganized" rides can take place--culminating in a judge's 2006 decision that prohibits the city from barring the ride and the NYPD creating "parade rules" for groups of 50 or more. Last year, a cop explained how they gear up for Critical Mass and in May, the Reverend Al Sharpton rode with Critical Mass, reminding bicyclists that people of "all ages and all backgrounds and all races" need to stand together, or else the plice will try to "play one community against each other [and] they get through the middle."