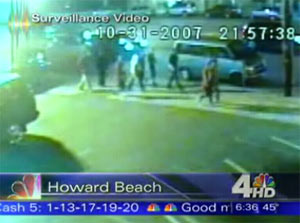 Howard Beach residents are probably shaking their heads over reports of yet another allegedly racially motivated attack in their neighborhood. The police say that a group of white teenagers claims they were attacked by a group, who were made up of Hispanics and blacks.

At Cross Bay Boulevard, a the group of white teens noticed the group of black and Hispanic teens; according to the Post, "The apparent leader of the black group walked up to his white counterpart and circled him while staring menacingly." The following events were described by Police Commissioner Kelly:

Five people were arrested and charged with gang assault; criminal mischief, and resisting arrest - and they were just 15 and 16 years old. The police are still investigating whether the attack was indeed a hate crime. The recent increase in hate crime complaints has prompted City Council Speaker Christine Quinn and the Reverend Al Sharpton to launch a "Day Out Against Hate" on November 29. Quinn said, "The one way to drown out hate is to have a loud and consistent drum beat for tolerance."

Howard Beach is no stranger to race-related crimes: In 1986, a black man, who was chased by a group of whites into the highway, was killed by a car. And in 2005, a group of white men attacked a group of blacks. The ensuing trial debate the meaning and power of a racial epithet and one of the white attackers was sentenced to 15 years for the hate crime.