The NYPD is heightening its security after the apparent suicide bombing in Manchester, England on Monday night. The bombing, which occurred at the end of an Ariana Grande concert, killed at least 22 people and injured 59 others. British Prime Minister Theresa May called it an "appalling, sickening" attack.

Many of Grande's fans are young, as which May noted in her statement: "The explosion coincided with the conclusion of a pop concert which was attended by many young families and groups of children. This attack stands out for its appalling, sickening cowardice, deliberately targeting innocent, defenseless children and young people who should have been enjoying one of the most memorable nights of their lives."

broken.
from the bottom of my heart, i am so so sorry. i don't have words.

President Donald Trump offered his "deepest condolences" and prayers to the victims of the attack while on his overseas trip. "We stand in absolute solidarity with the people of the United Kingdom. So many young, beautiful, innocent people living and enjoying their lives murdered by evil losers in life," he said in Bethlehem. "I won't call them monsters because they would like that term. They would think that's a great name. I will call them from now on losers because that's what’s they are. They’re losers. And we'll have more of them. But they’re losers—just remember that."

The NYPD said, "Out of an abundance of caution, we have moved additional heavy weapons teams to high profile locations around the city. In addition to our heavy weapons teams, New Yorkers will also see vapor wake explosive detection dogs, highly trained counterterrorism officers, and random bag checks at transit locations, among other things."

Our prayers are with the victims, their families, and the first responders in Manchester. The NYPD is closely monitoring the situation.

Governor Andrew Cuomo also said he was "both shocked and heartbroken by the horrific explosion at the Manchester Arena... An attack on one is an attack on all, and New York stands in solidarity with the British people and our friends around the world against the forces of hate and terror." 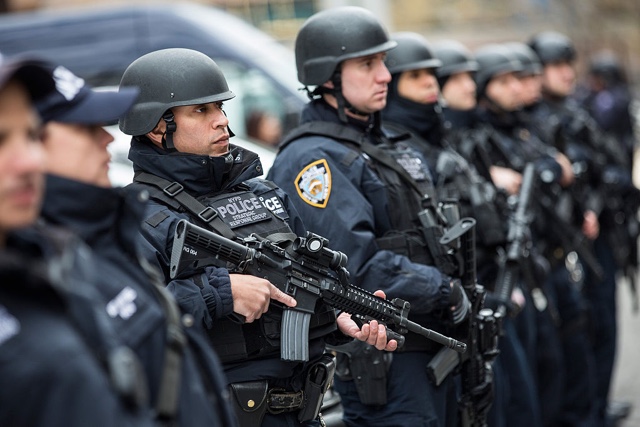 NYPD Counterterrorism officers at a press event in 2016 (Getty Images)

Cuomo has directed law enforcement across the state to "step up security and patrols at high-profile locations across New York, including our airports, bridges, tunnels and mass transit systems."

One concertgoer accused Manchester Arena of having lax security measures; according to the Daily News, Nikola Trochtova said on Czech public radio, "There was almost no security check, rather zero... They let us get in without any check if we have anything with us. The only thing they were interested in was if we had any bottles of water with us. They almost didn't check our bags, they didn't take a look."

Last month, a TripAdvisor review of Manchester Arena blasted the facility's security for not checking her bag at all before an Ed Sheeran concert, "A female security person just scanned our ticket and didn’t check my bag at all. Once we got in and bought a bottle of wine the top is taken off so they are not used as missiles but no check to see if you have any type of weapon/bomb in your bag. In these times of terror attacks it’s not good enough for the crowd or the act on stage. #needs sorting"

#ariana grande
#manchester arena
#nypd
#suicide bombing
#terrorism
Do you know the scoop? Comment below or Send us a Tip