Police are searching for a callous hit and run driver who stole a minivan and ended up hitting a family in Brooklyn. A 12-year-old girl was killed while her mother and 9-year-old sister were hospitalized. A witness said the driver was "going 120 mph."

According to the NYPD, the family was waiting at a bus stop Flatlands Avenue and East 46th Street at 4:42 p.m. when a Dodge Caravan was careening out of control past Schenectady Avenue. The minivan jumped the curb and knocked down the family. The driver fled the scene; a witness told WCBS 2, "I saw the dude get out of the car, started walking then he took off at a fast pace and started running."

Others at the scene tried to help the family. Shamar Brooks told the TV station, "There was [someone] actually under it and we lifted it up," while another said to WABC 7, "Me and a couple of other guys pushed the car up onto the hydrant." Joey Sellers, 12, was pronounced dead at Kings County Hospital while her 38-year-old mother, Marsha Landias, and little sister remain there in critical condition. Landias, who is a nurse at the hospital, was reportedly in surgery yesterday. 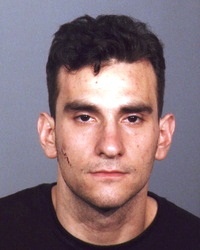 Police say the driver is believed to be Robert DeCarlo, a 26-year-old whose last known address was in Brooklyn. An eyewitness said, "He went through somebody's yard jumped the fence," he said. "Jumped after him, then he jumped a second fence, I jumped after him again. People are heartless. How can you hit three kids and run? That's heartless."

The Post reports, "The craven driver was believed to have wound up a mile away, in an alleyway at Avenue J and East 43rd Street, where he hid for 10 minutes until a car came and picked him up, sources said cops believe. Cops were investigating a cellphone call made from that location shortly after the crash."

Police, who say that the car was not being pursued by officers, describe DeCarlo as 5'7", 170 pounds, with brown eyes and short black hair. Anyone with information in regard to this incident is asked to call Crime Stoppers at 1-800-577-TIPS (8477). The public can also submit their tips by logging onto the Crime Stoppers website at WWW.NYPDCRIMESTOPPERS.COM or by texting their tips to 274637 (CRIMES) then enter TIP577.

#brooklyn
#fatal crash
#hit and run
#hit and run driver
#joey sellers
#robert deCarlo
#vision zero
Do you know the scoop? Comment below or Send us a Tip