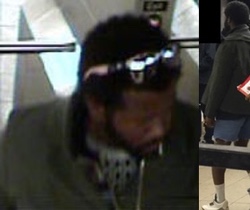 Over the past week, the police have asked for the public's help in finding three suspects in separate forcible touching incidents in the subway system. Which is also an important reminder that victims should report incidents—and that the MTA has an online form to do so.

One incident is from April 27, 2017: According to the NYPD, around 9:10 a.m. on the northbound 6 train platform at the Canal Street station in Manhattan, "an unidentified male approached a 24-year-old female victim from behind and rubbed his pelvic region on the victim's buttocks."

Cops said the man fled aboard the train and the victim sought assistance from the station booth agent.

The victim was not injured. 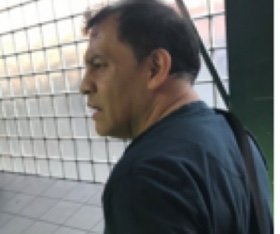 On June 9, police say that a 17-year-old reported an incident at the Broadway and Roosevelt Avenue F train station in Queens.

Authorities say that around 7:50 a.m., she was exiting the staircase when an unidentified male touched her on the buttocks.

He was last seen wearing a blue shirt, carrying a black bag.

Police also released an image of him (left).

The third incident is from June 17 around 6:40 p.m. A 26-year-old woman was leaving the Grand Central station at Lexington Avenue and East 42nd Street by stairs when, police say, a man "approached her from behind, placed his hand under her dress and grabbed her buttocks." 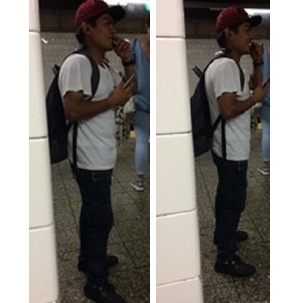 The suspect then fled the station. The victim was not injured.

Anyone with information in regards to these incidents is asked to call the NYPD's Crime Stoppers Hotline at 1-800-577-TIPS (8477) or for Spanish, 1-888-57-PISTA (74782). The public can also submit their tips by logging onto the Crime Stoppers website at WWW.NYPDCRIMESTOPPERS.COM or by texting their tips to 274637 (CRIMES) then enter TIP577.

#forcible touching
#subway
#subway grinder
#subway pervert
Do you know the scoop? Comment below or Send us a Tip
A new Gothamist is coming! We’ve moved comments over to our beta site. Click here to join the conversation and get a preview of our new website.