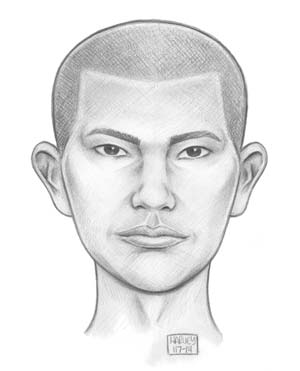 The NYPD wants the public's help in identifying a suspect in an attempted rape that occurred in Flushing last week. The police also want you to know that they did have a NYPD helicopter canvassing for him—but then someone shined a laser at the helicopter, interrupting the canvass.

According to police, the attack occurred in front of 83-39 Daniels Street at around 8 p.m. on Wednesday, September 24: "The suspect approached the 26-year-old victim, threw her to the ground, stated that he was going to rape her, but fled the scene after the victim fought him off." Apparently he was about to pull off her pants.

Police released a sketch of the suspect, described as being 5'5" and 140 pounds, and also a photograph of a size 8 Puma sneaker left at the scene. In a request for the public's assistance on Facebook, the NYPD explained:

When an NYPD helicopter circling 750 feet above Queens recently was targeted by a man pointing a high-powered laser beam into the cockpit, the pilots were assisting police officers below search for a violent suspect who had just thrown a woman to the ground and tried to rape her.

The persistent blinding light caused the Aviation Unit to suspend its canvass of the neighborhood around the incident just south of the Grand Central Parkway and instead track and arrest the laser culprit.

Although it has been a federal crime since 2012 to point a laser at any aircraft, there were still 99 such incidents reported by pilots in New York City airspace in 2013, and nearly 4,000 reported nationwide, according to FBI statistics.

Meanwhile, the NYPD continues to search for the sexual assault suspect.