More than five years after Eric Garner was arrested and fatally choked for allegedly selling loose cigarettes on a Staten Island street corner, the NYPD has announced that the officer responsible for the death, Daniel Pantaleo, will lose his job.

Calling it an "extremely difficult decision," Police Commissioner James O'Neill said on Monday that he would follow the guidance of an administrative trial judge, who recommended Pantaleo's firing earlier this month.

"The unintended consequence of Garner's death must have a consequence of its own," O'Neill told reporters during a press conference. "It is clear that Daniel Pantaleo can no longer effectively serve as a New York City police officer."

The decision caps off a lengthy search for justice for the 43-year-old Garner, whose final words, "I can't breathe," became a cause célèbre for the Black Lives Matter movement. After a grand jury declined to bring criminal charges against Pantaleo in 2014, the city elected to wait on the results of a Department of Justice investigation before beginning a disciplinary trial into the officer's conduct—a choice that Mayor Bill de Blasio now says he regrets.

With the statute of limitations set to expire, the federal prosecutors announced last month that they would not bring civil rights charges against Pantaleo, meaning he will not face punishment beyond the loss of his job and pension. Records show that Pantaleo took home more than $400,000 in taxpayer money in the years following Garner's death.

The long-delayed department trial began this summer, and was overseen by Deputy Commissioner Rosemary Maldonado, an administrative judge. She concluded that Pantaleo was guilty of using an illegal chokehold, and recommended his termination.

Listen to Brigid Bergin and Cindy Rodriguez discuss the decision with Jami Floyd on WNYC:

In a 46-page opinion, which leaked this weekend, Maldonado wrote that Pantaleo's "use of a chokehold fell so far short of objective reasonableness that this tribunal found it to be reckless—a gross deviation from the standard of conduct established for a New York City police officer." She added the officer was "untruthful" and "self-serving" in his defense of the maneuver to investigators.

Attorneys for Pantaleo had argued that he did not use the prohibited chokehold, but instead positioned his elbow in a way that "protected" Garner's windpipe as he took him down.

On Monday, O'Neill said that while he felt the chokehold was deployed "under extreme pressure," it was also evident that Pantaleo "consciously disregarded the substantial and unjustifiable risk of a maneuver explicitly prohibited by the department." The commissioner repeatedly noted that his time spent as a police officer made the decision more difficult: "Had I been in Officer Pantaleo's situation I may have made similar mistakes."

He added that while Garner's death is a tragedy, Pantaleo's termination was "a different kind of tragedy." 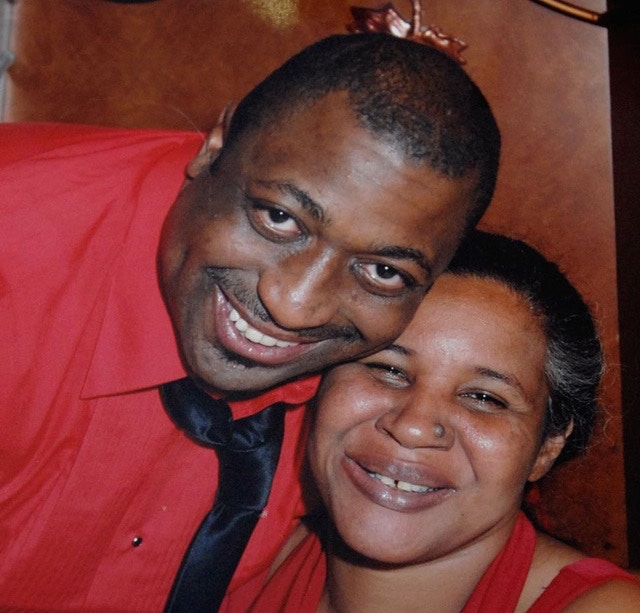 Eric Garner with his wife, Esaw.

Pat Lynch, the president of the Patrolmen's Benevolent Association, claimed in a statement that the decision to fire Pantaleo will render the NYPD "rudderless and frozen." The city's largest police union is now urging officers to "proceed with the utmost caution in this new reality, in which they may be deemed 'reckless' just for doing their job."

The Civilian Complaint Review Board, which acted as prosecutors in the non-criminal trial, celebrated the announcement.

"Officer Daniel Pantaleo’s termination from the New York City Police Department does not make the death of Eric Garner any less harrowing," said CCRB Chair Fred Davie. "But it is heartening to know that some element of justice has been served."

For their part, family members of Garner say that merely terminating Pantaleo is not enough, noting that at least 11 other officers involved in the arrest have not faced consequences.

Following the killing, Pantaleo's partner, Justin D'Amico, erroneously wrote that force was not used against Garner, who he claimed was guilty of evading taxes on 10,000 or more cigarettes—a figure he later admitted was incorrect. In a statement released earlier today, Garner's mother, Gwen Carr, said that "it's a disgrace that de Blasio has let Pantaleo, D'Amico and others stay on the force."

Pantaleo's attorney, Stuart London, is expected to challenge the decision in court—though O'Neill noted on Monday that the decision is final and will not be reversed. The commissioner also confirmed that Pantaleo would lose his pension as part of the termination.

"What I want residents of New York City to take from this is that there is accountability in the police department—it is fair and impartial," O'Neill said. “Don’t judge us on one incident, judge upon the totality of what we do."

A spokesperson for Mayor Bill de Blasio did not immediately respond to requests for comment.

This is a breaking news story—check back for updates.

Standing alongside her brother and Rev. Al Sharpton in Harlem, she said that they will continue to push for congressional hearings on her father's death, as well as for a state law that bans the use of chokeholds. Garner added that the family wants to see consequences for the other officers involved in the deadly arrest as well.

UPDATE 3:25 p.m. Mayor Bill de Blasio addressed reporters about Pantaleo's firing on Monday afternoon, saying that the decision "ended a chapter that has brought our people so much pain and so much fear over this last five years."

"I know that the NYPD of today is a different institution than it was just a few years ago," the mayor added. "I know the NYPD has changed profoundly. I know that members of the NYPD learned the lessons of this tragedy—they acted on it, they did something about it."

Meanwhile, in his own press conference, PBA President Pat Lynch once again claimed that Pantaleo's firing would leave the NYPD “frozen.”

#daniel pantaleo
#eric garner
#james o'neill
#nypd
#original
Do you know the scoop? Comment below or Send us a Tip