In response to the recent increase in shootings, the NYPD is cobbling together an extra 1,000 police officers by pulling cops from their desk jobs, assigning rookies to high crime neighborhoods, and having some officers already on patrol work more overtime. "We didn't hit anybody too hard," Chief of Patrol James O'Neill said at a press conference yesterday, speaking of the desk officers who will be reassigned for 90 days as part of the "Summer All Out" initiative. "You have to remember from where they came…They have a gun and a shield, they'll remember how to do it."

Commissioner Bill Bratton said that, overall, crime was down, except for felonious assault and auto theft, increases which he attributed to assaults on Rikers Island and the theft of NYPD bait cars. "I know there's been a lot of attention paid to the increase in shootings, and somehow or another the city's in crisis or somehow another this is starting to get out of control," Bratton told reporters. "Not at all, this is nothing new, as you can see." 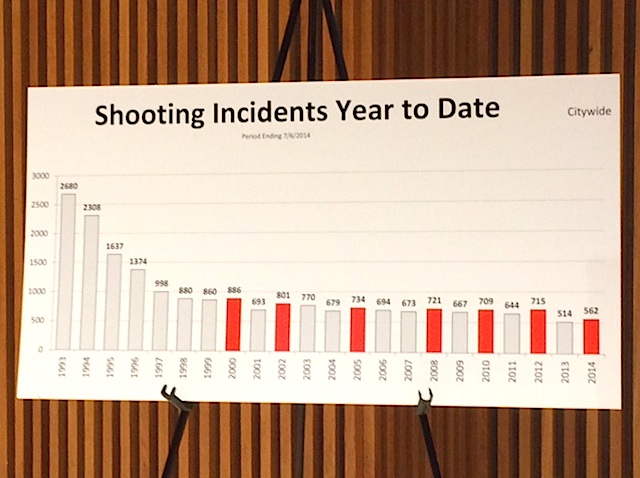 A chart displayed at the press conference (Gothamist)

Chief O'Neill added that the officers, who are being assigned to 10 precincts and 5 public service areas, were pulled from over 30 different divisions, including the personnel bureau, support services, and the medical division. "They're going through a two-day refresher class, and most of them are going to be on foot post," O'Neill said.

Of the 1,000 extra officers, 313 are part of "All Out." The others are comprised of the 600 recent graduates of the police academy, and those already working overtime. Previously the NYPD has said it would move away from former Commissioner Ray Kelly's strategy of assigning green officers to high crime areas, but Chief of Department Philip Banks noted that "we're making a change on some of those adjustments." 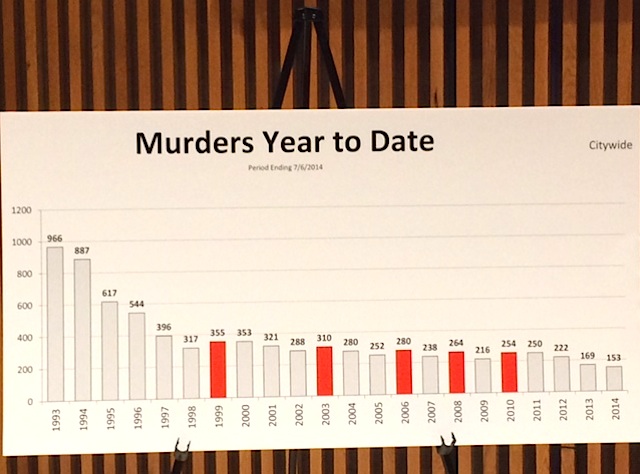 A chart displayed at the press conference (Gothamist)

The 47th Precinct in the Bronx, and the 69th Precinct in Canarsie, both of which have seen the largest spikes in shootings, are receiving 40 additional officers apiece; the other precincts and PSAs are getting between 15 and 20. 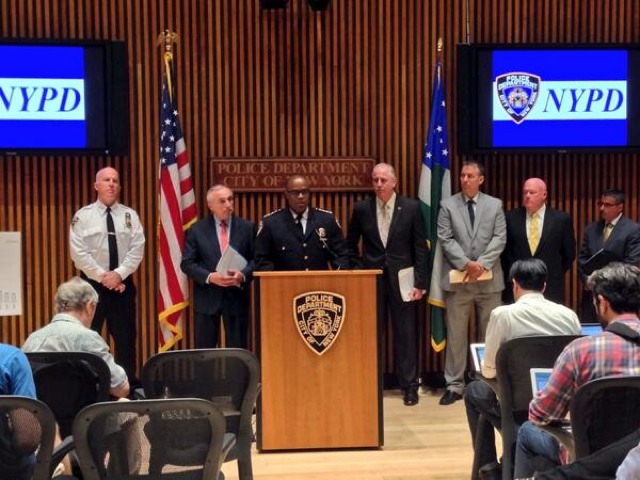 The NYPD addresses the media (NYPD)

Chief Banks described the increased police presence as a continuation of a new focus on community affairs. "[Residents] are going to see the same people every day, the community is going to see the same officer every day…you're gonna see consistency," Banks said. "They're gonna be knocking on doors to see how [the NYPD] is doing. The residents of New York City will see more police officers on the street."

In what felt like a non-sequitur during the briefing, Deputy Commissioner for Counterterrorism John Miller apprised reporters of some vague rumblings that constituted a threat to New Yorkers' well being.

"Watching the current threat stream, and the increased traffic, and the pitch of the traffic, we are monitoring several situations simultaneously," Miller said, before mentioning Syria, ISIS in Iraq, and the recent spate of killings between Palestinians and Israelis. "We had a conversation with the our detective assigned in Tel Aviv, and there have been 70 rockets fired from Gaza, so that's a situation that continues to change and remain dynamic…Police Commissioner Bratton himself has sat in on [federal] classified briefings."