NYPD File On Slain Cyclist Contains Photos Of Family, None Of Crash Scene

On Friday, the NYPD finally released the documents pertaining to the investigation of the death of cyclist Mathieu Lefevre. According to a statement released today by Lefevre's mother, the files show that the driver of the truck, Leonardo Degianni, made a right turn without signaling, "knocked Mathieu 40 feet, left him for dead, and then dragged his bicycle another 130 feet before depositing it and driving off." Incredibly, there are no photos of the scene of the incident in the NYPD's file because "the investigators' camera was broken." However, the file does contain "numerous" photos of the Lefevre family and their attorney, prompting Erika Lefevre to write, "Apparently, NYPD cares more about investigating our family's efforts to get information from it, than about properly investigating Mathieu's death."

Lefevre's statement also notes that the NYPD has amended their initial determination that Degianni's actions exhibited "no criminality," and have given him summons for failure to signal and failure to exercise due care.

A description of surveillance video of the crash, as provided to Streetsblog, describes Mathieu being struck by the passenger side of the truck before being hit again by the driver's side wheel. The footage makes the NYPD's decision to not file criminal charges against Degianni all the more puzzling.

"The failure to use due care citation is significant because there were multiple impacts," Steve Vaccaro, the Lefevre's attorney tells us. "The driver could have prevented those had he had been paying attention to what he was doing. Use of due care could have prevented Mathieu's death." Vaccaro points out that while the penalties for failure to use due care, or Diego and Hayley's law, are relatively minor, "it's use reflects a major legislative effort by Transportation Alternatives and safety advocates to protect the public from negligent drivers."

Vaccaro says the photos of the Lefevre family came from the demonstration they held in front of 1 PP on November 30 to announce a massive independent investigation of traffic crashes, and that the file also contained an article published in the New York Times last summer on Vaccaro's firm that included his photo. "It appears they were doing a little background research on their opponents." 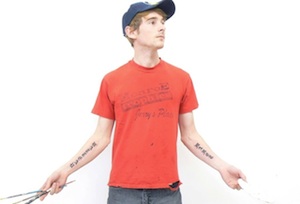 The NYPD's deadline for releasing the documents per the Lefevre's FOIL request was today, and Vaccaro says the hearing has now been moved to February 14. "We haven't had enough time to conclude whether we have everything that the NYPD was required to turn over. The NYPD violated the law by withholding, it didn't have the legal grounds to withhold it, so we need to review the information to make sure they've complied."

What the documents do seem to suggest is what Vaccaro and the Lefevre's have believed all along: that the NYPD's investigation of Mathieu Lefevre's death in October was sloppy and lacking in substance. In her statement, Erika Lefevre asks the Kings County DA's office to review the case and consider charging Degianni, but acknowledges that any investigation on their part would be "hampered by the NYPD's failure to preserve evidence from the crash scene," including blood evidence and Mathieu's helmet.

Asked if the NYPD would have given summonses to Degianni at all without the publicity and the FOIL lawsuit, Vaccaro says that to answer that would be pure speculation. "However, we do believe that our public questioning of the investigation process was necessary and that it had an effect of improving the quality of the NYPD investigation."

The NYPD's investigation of Mathieu Lefevre's death shows a disturbing disregard for the loss of life at the hands of dangerous drivers. From failing to secure evidence at the scene of the crime to withholding information from Mathieu’s family, Ray Kelly's NYPD failed to do their job throughout this investigation. For all New Yorkers to be safe from the threat of dangerous drivers, we need the NYPD to take traffic safety and enforcing the law seriously.

NYPD spokesman Paul J. Browne and the DCPI office have not responded to requests for comment. You can read Erika Lefevre's entire statement below.