This morning, the NYPD and FBI announced they wanted to speak with a man in connection to Saturday night's bombing in Chelsea. The FBI described (PDF) Ahmad Khan Rahami, 28, as a U.S. citizen of Afghan descent, and that he "should be considered armed and dangerous."

Rahami is 5'6" and about 200 pounds with brown hair, brown eyes and brown facial hair. His last known address was in Elizabeth, NJ (where five improvised explosive devices were found at a train station overnight). It's believed that the FBI is raiding that address; the Post reports, "Officers with the Bureau of Alcohol, Tobacco, Firearms and Explosives were reportedly taking part in the raid. It’s unclear whether they found any possible suspects."

FBI said, "If you have any information concerning this case, please contact the FBI's Toll-Free Tipline at 1-800-CALL-FBI (1-800-225-5324), your local FBI office, or the nearest American Embassy or Consulate."

This morning, Mayor Bill de Blasio said on Good Morning America, "In the coming hours we are going to be able to say a lot more about what happened here. It is certainly leaning more in the direction that this was a specific act of terror."

Last night, the FBI also stopped a car on the Belt Parkway near the Verrazano Narrows Bridge in Brooklyn. According to the Daily News, "[F]ederal agents nabbed several people of interest with a weapons stash inside an SUV, according to law enforcement sources. The five taken into custody had come over the Verrazano Bridge from Staten Island. Investigators were trying to determine if the occupants of the SUV were about to drive out of town or take a plane, sources said."

The FBI said, "No one has been charged with any crime. The investigation is continuing."

Saturday night's explosion occurred around 8:30 p.m. by 131 West 23rd Street, between 6th and 7th Avenues in Manhattan. A device, apparently a pressure cooker with a flip cellphone and Christmas lights that was placed under a dumpster, exploded, sending a loud blast through the neighborhood that blew out or shattered nearby buildings' and cars' windows, rocked cars and injured 29 people, many of whom were hit by shrapnel. 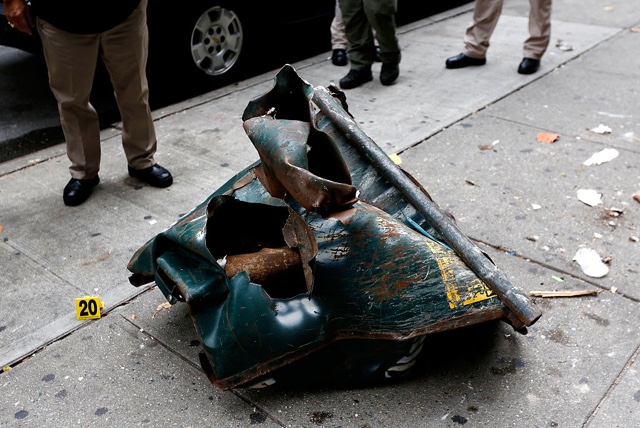 Another device, also reportedly a pressure cooker with a flip cellphone and Christmas lights, was found blocks away on West 27th Street, between 6th and 7th Avenues, and removed by the NYPD bomb squad. The device, which did not detonate, was removed safely and first went to the NYPD's firing range in the Bronx and is now being sent to the FBI for examination.

BREAKING: The bomb that did not detonate on 27th St. in Manhattan had a cell phone inside. The phone was linked to Rahami in NJ, sources say

Earlier on Saturday, a device exploded in Seaside Park, NJ; two others were found. Initially, NYC officials and the FBI did not believe the Chelsea and NJ incidents were connected, but now it's suspected they are connected.

US law enforcement sources now believe suspect is connected to all incidents including Seaside, Elizabeth & both Manhattans @CBSThisMorning

At the Elizabeth, NJ train station, five devices were found in a backpack at the train station. One detonated, NJ.com reports, "as authorities were using a bomb robot to examine the item, officials said. The blast occurred around 12:40 a.m. near Morris Avenue and Julian Place. The explosion was not a controlled blast, but happened unintentionally as the robot was cutting the device, according to Mayor Christian Bollwage. No one was injured in the blast, Bollwage said."

#Ahmad Khan Rahami
#Chelsea
#chelsea explosion
#nj
Do you know the scoop? Comment below or Send us a Tip