The multi-agency—including the NYPD and FBI—terror drill that was conducted in Queens over the past few nights was deemed a success by Police Commissioner Ray Kelly. He told the AP, "We plan for the worst with the best exercises possible. This one was realistic — at night, in the rain, with traffic. We put our personnel to the test and they performed well." The exercise involved hundreds of police officers and federal agents, who were on the hunt for a radiological device.

As part of the drill, the NYPD set up a "radiological dragnet," using various radiation detectors to find the materials before the device was to be detonated. The device was traveling in Queens, which meant the NYPD had to close lanes and inspect cars, ultimately finding a red SUV that had a mock device designed by the Department of Energy to emit safe levels of neutrons (there were technicians protecting it in the SUV, too). The drill annoyed some motorists; one driver told the Daily News, "This is a lot of taxpayers' money to have to wait even longer to get home. I'm tired. I had a long day. I thought there was a serious accident." Another photograph of the NYPD drill after the jump.

The NYPD also put safe amounts of radioactive materials in five test cars for the officers to find in a separate test—those were all intercepted on different bridges. FBI counterterrorism supervisor Don Alway told the AP, "Hopefully, we'll never have to do this. But if we do, we have to do it right the first time." 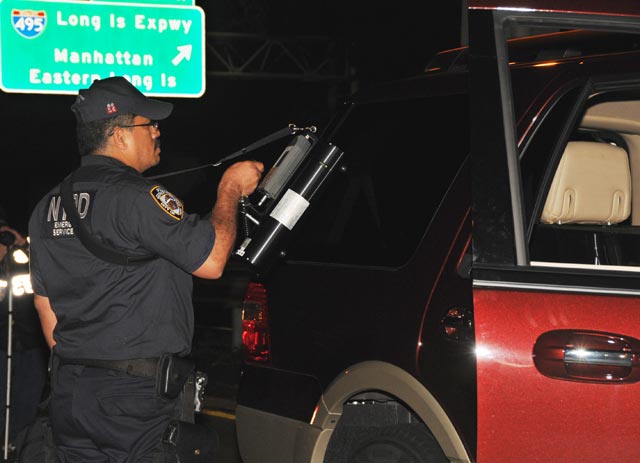 An NYPD officer uses a device to detect nuclear emissions as he inspects a vehicle believed to contain a mock nuclear device, in New York. Photograph from the NYPD