An arrested Occupy Wall Street protester obtained a piece of paper he allegedly found in the back of a police van outlining a set of "Dos and Don'ts" for the NYPD officers on the Disorder Control Unit manning the protests in Lower Manhattan. The 19 guidelines range from advice on proper attire to stressing the need to act as a team in chaotic situations.

Noting that having "helmet and baton, ready for immediate use" is "critical," the memo advises, "A strong military appearance, with sharp and precise movements, is a force multiplier and a psychological advantage to us." In our experience, witnessing hundreds of police in riot gear holding batons is certainly chilling, but it may in fact exacerbate the tensions between unarmed protesters and heavily armed police, making an already adversarial situation more hostile.

Other guidelines make terrific sense, such as "use minimal force necessary to achieve the objectives," "be tolerant of verbal abuse," and "maintain firearms discipline." With regard to journalists, Commissioner Ray Kelly recently stressed the memo's point to "Clearly distinguish between participants to be arrested and innocent passerby/onlookers." It's unclear whether the directions were wholly created by the NYPD or compiled by a coalition of departments across the country along with federal law enforcement.

The Oakland police (among other departments) could stand to follow a few of the NYPD's guidelines, especially warnings on use of force and "firearms discipline." 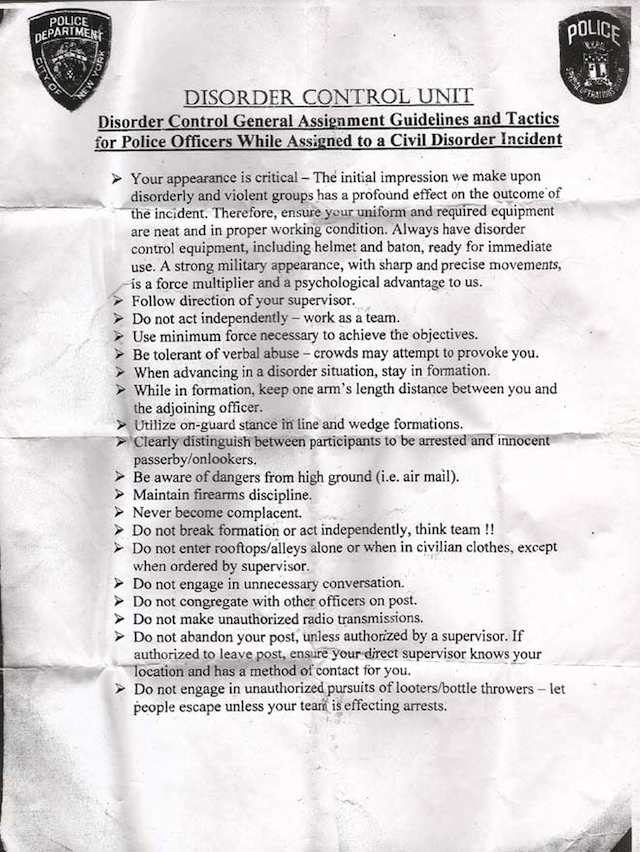