Determined to get the hang of Twitter despite its tendency to backfire dramatically, the NYPD kicked Monday off with a "motivational" quote from Jack Nicholson's character in A Few Good Men, Colonel Nathan R. Jessup. You know, the lying reactionary who accidentally confesses to ordering subordinates to beat a Marine to death. Motivation! 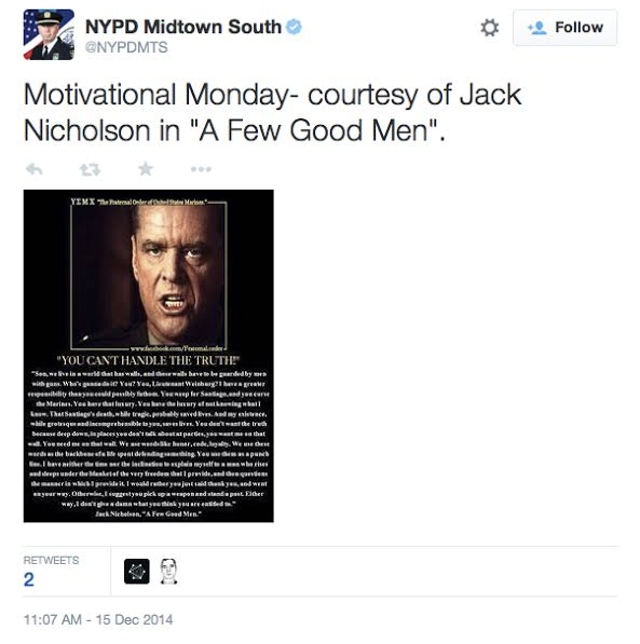 Col. Jessup is immediately taken into custody after admitting his role in the murder and is subsequently prosecuted, which isn't something NYPD officers have to worry about. The subtext of the NYPD's tweet presumably has to do with how police officers, like soldiers on Nicholson's proverbially "wall," sometimes need to do things (like homicide?) that the general public might find distasteful, in order to keep the general public safe. This is the hard "truth" that whiny liberal tree huggers like Tom Cruise and Bill de Blasio "can't handle."

But it appears that the NYPD's Twitter can't handle the truth either. The tweet, published on the Midtown South precinct twitter, was deleted hours later without explanation.

It's worth noting that Midtown South's Commanding Officer Edward Winski, whose photo is on the precinct's Twitter profile, gained notoriety during the Occupy Wall Street protests for his allegedly heavy-handed tactics. On one occasion Winski was seen on video roughly arresting an activist who was merely videotaping a protest. That's how you handle the truth!

#mynypd
#nypd
#police brutality
Do you know the scoop? Comment below or Send us a Tip