In addition to revealing that he personally busts New Yorkers smoking joints before 9 a.m., Police Commissioner Bill Bratton announced today that he's shutting down a perverts' paradise in Times Square. This one has nothing to do with desnudas—it actually involves Corporate America.

In Times Square, in a pedestrian plaza near where the desnudas and other performers congregate, Revlon has created a pen for people to watch themselves on a billboard and take a photograph of their big moment, which they will hopefully share on social media. This, in turn, has created a golden opportunity for gropers. 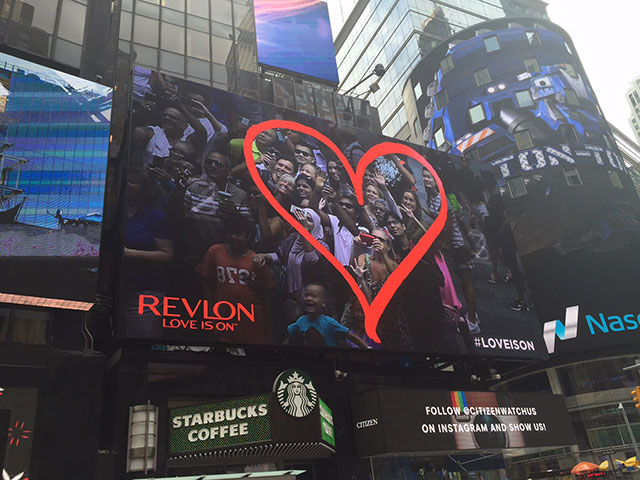 Bratton said this morning that four men had been arrested for groping people in the pen in separate incidents. It all happens at night:

The biggest hot spot in Times Square is in front of that Revlon sign. And the biggest problem we have there is people coming up and groping people who are so intent of taking selfies of themselves, they don’t realize somebody grabbing their but while they’re taking pictures... After 8 o’clock they came out, the predators, and we arrested a whole bunch of them...

Literally hundreds of people stand there and take selfies of themselves on that screen, an extraordinarily high-definition scree. But we found that there were those taking advantage of people’s attention. You’d think something that’s being photographed would deter them, but just the opposite, encourage them.

All four suspects were arrested last month—Nicholas Sportelli, 34, Saoud Alotaibi, 37, Alfredo Diaz, 45 and Delashon D. Atkins, 27—for creeping in the pens and all were charged with forcible touching and sex abuse. Atkins was also arrested in August for the same thing.

The NYPD asked Revlon to turn off the screen at 8 p.m., and the cosmetics powerhouse agreed. A Revlon spokesman told the Post, "We have followed the NYPD’s lead on these matters and will continue to do so."

#forcible touching
#groping pen
#pervert
#Times Square
Do you know the scoop? Comment below or Send us a Tip