The gorgeous new Domino Park opened to the public last month, bringing six-acres of desperately needed greenery and recreation space and waterfront access to the edge of the East River just north of the Williamsburg Bridge. But for all the attractive features of this privately-funded public park—part of the Two Trees Domino mega-development—the designers apparently did not put much thought into how cyclists would legally come and go from the space. [UPDATE BELOW]

For some reason, River Street, the newly built two-lane access road adjacent to the park that runs from North 3rd to South 5th Street, is a one-way street with no bike lane. And it seems that local police have been paying extra attention to the shiny new road, and are now writing tickets to cyclists who become unwitting victims of poor street design.

One such shakedown took place early Wednesday evening, at a time when "there were no other cars in sight and not much pedestrian or bicycle traffic," according to Jamison Hermann, who captured video of the bust.

Hermann told Gothamist that he spoke briefly with the cyclist, who confirmed that he'd received a ticket for riding the wrong way. The cyclist then walked his bike to the sidewalk, while the police car remained parked on the edge of the largely deserted street, soaking up the view. 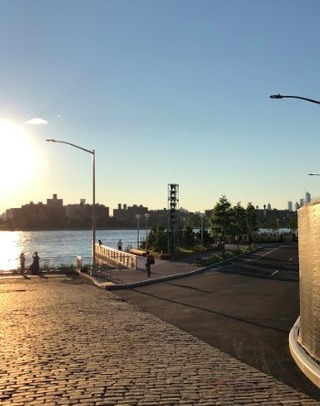 "Apparently they spent $3 billion developing this site and didn't think to put in a bike lane," Hermann added.

A spokesperson for the Department of Transportation told Gothamist that this is a "private street," and that the developers are responsible for traffic direction and circulation.

A person familiar with the situation said that the developer has encountered issues with traffic attempting to travel north since the one-way street opened, adding that police have been periodically ticketing cyclists after issuing warnings about going in the wrong direction. He would not elaborate on how that warning system works or when the crackdown began, and declined to comment on whether a bike lane was ever considered for the access road.

In an email to Gothamist, a Two Trees spokesperson added, “There’s always a learning curve with the opening of a brand new street, and we are working hand-in-hand with NYPD to educate drivers, pedestrians and cyclists about traffic flow and ensure that it is safe for everyone."

A spokesperson for the NYPD did not respond to a request for comment.

UPDATE: After our story went up, the cyclist who received the ticket reached out to us to say that he witnessed cops issuing summonses to two other cyclists as he was leaving the park. He added that signage was not clear, and speculated that the officer was taking advantage of this confusion to bust other cyclists driving the wrong way. His full statement is below:

"It was definitely very frustrating; I am a safe cyclist and I am also very courteous to pedestrians and follow traffic laws. I was truly unaware that the road was a one way road. In fact, I didn’t even think it had been opened to street traffic yet. On my way out of the park he had two other cyclists both in line getting tickets as well. I really feel that this is an example of poor policing. There was no risk of anyone being hurt by riding their bicycles in the park. I think the officer recognized that this is not a clearly marked location, which is why so many cyclists are entering the park there; and he is using it to his advantage to hand out tickets. A better approach would be to improve the signage, or spend a few days giving warnings to cyclists to better communicate the traffic pattern that is planned for the brand new park.

It was only $50. I don’t plan to fight it because it’s not worth my time and I doubt I would win any way. Luckily, this ticket is not a financially viable issue for me, but a ticket like this could be a big deal for a lot of other New Yorkers. The worst part is that it discourages cycling, which on a public safety level is much safer than cars and other public transportation."

#bikenyc
#cyclist
#domino park
#nypd
#ticket blitz
#williamsburg
#original
Do you know the scoop? Comment below or Send us a Tip