Bratton is planning to leave in September, for a corporate job. He will be replaced by Chief of Department James O'Neill, who started with the NYPD in 1983, as a transit cop. The Wall Street Journal reports that Bratton's new gig is senior managing director and executive chairman of risk management for the international consulting firm Teneo.

The company got press earlier this year when it came out that cofounder Declan Kelly, an Irish businessman, was appointed by Hillary Clinton when she was secretary of state as economic envoy to Northern Ireland—while he was also consulting for two multinational corporations. The company launched not long after, leveraging the strength of its Clinton connections, and Bill Clinton had a paid role at the consulting company while his wife was a top U.S. official.

Bratton was spotted chowing down with a Teneo honcho at a corporate power breakfast two weeks after starting his job as police commissioner back in 2014.

Bratton, a Boston native, was hired in 1990 as head of New York's transit police, where he worked alongside criminologist and consultant George Kelling, a proponent of the Broken Windows theory, which holds that aggressive policing of low-level violations will reduce overall crime. When Rudolph Giuliani took office as mayor in 1994, having campaigned on a conservative, tough-on-crime message, he hired Bratton as police commissioner on the strength of what he saw as Bratton having cleaned up the subway system.

"I chose Bill Bratton because he agreed with the Broken Windows theory," Giuliani told a Time reporter.

The two would later butt heads over how to run the police department, and who got credit for its successes. In 1996, in an effort to get Bratton to resign, Giuliani leaked details of trips Bratton had taken with Wall Street financier Henry Kravis to Colorado and the Dominican Republic, though Bratton had paid back the cost of the vacations. It worked.

In 2002, Bratton became police chief of Los Angeles, and again stressed the role of data in driving down crime. Much later, it was revealed that the LAPD had misclassified 14,000 violent crimes, artificially lowering the crime rate over five years of Bratton's tenure, and continuing after he left. Bratton also consulted for the U.K. on policing, after then-prime minister David Cameron was barred from hiring him because he's not a British citizen.

During his 2013 mayoral campaign, de Blasio ran as an opponent of the NYPD's hugely expanded, and a judge would find, unconstitutional use of stop and frisk under then-commissioner Ray Kelly. Kelly and Bratton's philosophies on policing are basically indistinguishable, though the two hate each other, so observers were stunned when de Blasio hired Bratton to run the NYPD. The mayor dropped the city's appeal to the federal court decision banning some uses of stop-and-frisk, but Broken Windows as applied under Bratton's second tenure has drawn similar criticism, because it is overwhelmingly applied against black and Hispanic people. The correlation of Broken Windows to the reduction of serious crime is also widely debated.

"We’re not sorry to see him go," said Police Reform Organizing Project director Robert Gangi. "He was the leading proponent of Broken Windows policing in the country, and it’s policing that’s marked by a stark racial bias, that targets primarily low-income people of color who are engaged in low-level infractions that are largely decriminalized in white communities."

Gangig added that he doesn't "necessarily see it as the time to pop the cork in the champagne bottle," because without policy change from the mayor, what advocates see as the destructive aspects of Broken Windows will continue. 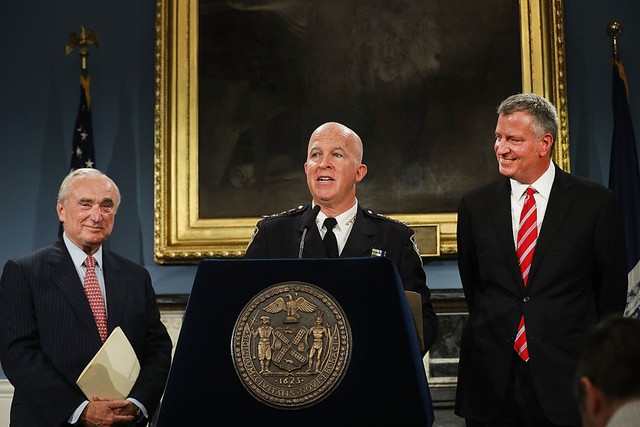 Whatever opposition to Bratton de Blasio expressed publicly dropped several decibels following the December 2014 murder of two police officers in a patrol car in Bedford-Stuvesant, and the subsequent silent protests by cops against the mayor at the officers' funerals.

Since then, Bratton has made many inflammatory statements that run counter to the mayor's messaging. Those include: calling "so-called rap artists...basically thugs;" calling Black Lives Matter protests "anti-societal initiatives" of which the shootings of officers are a "direct spinoff;" saying that women should "adopt a buddy system" to protect themselves from rape; saying that filming the police constitutes "an epidemic;" and claiming that marijuana should remain illegal because it is the source of the "vast majority" of violence in New York City.

Bratton told the New York Times last week that he would not stay on if de Blasio was elected to a second term.

"I have the luxury of going when I want to go," Bratton told the paper. "I’m not going to be here in the second term. That’s the reality of it."

The boss of the NYPD's 35,000 officers told de Blasio he's headed for the door last week, according to the Wall Street Journal.

Bratton and de Blasio told reporters that they discussed his departure starting on July 8th.

"It's been an amazing 16 hours," O'Neill said at the press conference. "Never in my life coming on this job in 1983 did I think I’d be standing at the podium talking as the next police commissioner."

O'Neill praised Bratton's work in helping to "shift this, the world’s largest police department, away from a focus that in some ways had lost sight of what we were supposed to be doing."

During the media event, de Blasio said Bratton's "contributions to our city are literally inestimable and extraordinary" and that he had driven crime down while strengthening police-community relations. Recorded crime has stayed at all-time lows during the pair's time in charge.

Bratton is also leaving amid an FBI investigation into corruption in the top ranks of the NYPD. The investigation has led to the arrests of two officers from the department's top echelon, and the demotion or firing of at least 11 cops. Bratton has said that the indictments of the officers and the questioning of others does not show "systemic corruption." Today he emphasized that his NYPD is working closely with the FBI and U.S. Attorney's Office, saying, "There's never been a relationship as good."

De Blasio called O'Neill the "architect" of a neighborhood policing program that is supposed to be rolled out in half of the city and all of its public housing this fall. The plan calls for beat cops to keep consistent shifts, remain within set geographic areas when responding to calls, and set aside a third of each tour for proactive police work like following up on past calls, and cultivating sources and neighborhood watch groups in neighborhoods.

"The people of this city have never experienced true neighborhood policing," de Blasio said. "It's never happened across this city on a sustained basis. That's what Jimmy O’Neill is bringing."

Bratton said he is passing the torch to a team built based on "shared vision." Chief of Patrol Carlos Gomez will take over from O'Neill as chief of department. The way Bratton envisioned the adjustments to his departure was, he said, "exactly as [de Blasio has] done here."

The outgoing commissioner said he expects a warm reception in the future, in contrast to his exit from the Giuliani administration.

"When I left, [Giuliani] gave me the key to the city," he said. "Little did I know he had already changed the locks."

"This time I will have a key to the city, I will have a continuing relationship with this mayor," he said. "I will be able to meet openly with everyone here."

Bratton thanked de Blasio for pouring $1.9 billion into the NYPD over two years, which he said was the largest funding amount allocated for any police department ever.

O'Neill, a Flatbush native, previously served as commander of the 25th Precinct in Harlem, the 44th Precinct in Grand Concourse, the Narcotics Division, and the Fugitive Enforcement Division. He was named chief of department, the highest uniformed rank, overseeing all uniformed personnel in the department, in November 2014.

Incidentally, yesterday protesters began an occupation of City Hall Park demanding the resignation of Bratton, the defunding of the NYPD, and an end to Broken Windows policing. They said goodbye to Bratton in their own way.

#Bill Bratton
#bill de blasio
#james o'neill
#nypd
Do you know the scoop? Comment below or Send us a Tip