An outrageous (but perhaps unsurprising) audio recording was played for jurors in the big federal lawsuit against the NYPD's controversial stop-and-frisk policy yesterday. The recording, made secretly last month by Officer Pedro Serrano in the 40th Precinct station house in the South Bronx, documents his heated argument with commanding officer Deputy Inspector Christopher McCormack, who blasted Serrano for refusing to meet stop-and-frisk quotas. 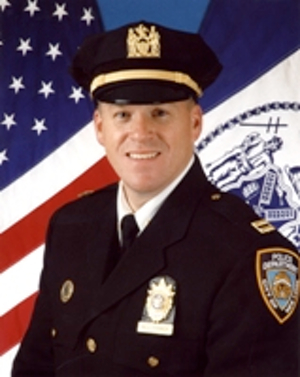 During the exchange, Inspector McCormack criticizes Serrano for making so few stops, arguing that the officer had a duty to stop violent crime by stopping and frisking “the right people at the right time, the right location.” When pressed to explain what he meant by "the right people," McCormack insisted that Serrano and other officers needed to stop people who were causing "the most problems." Pressed further, McCormack is heard on tape saying, "The problem was, what, male blacks. And I told you at roll call, and I have no problem telling you this, male blacks 14 to 20, 21."

According to attorneys for the Center for Constitutional Law, which is arguing the case on behalf of four people who say they were stopped and frisked because of their race, NYPD commanders routinely use the phrase "the right people" as code for blacks and Hispanics. 531,000 people were stopped as part of the program last year, more than five times the number when Bloomberg took office. Fifty-one percent of those stopped were black, 32 percent Hispanic and 11 percent white.

The Times reports that Serrano, who is Hispanic, testified yesterday that stopping and frisking minorities for no reason was "not a good feeling," and that he made the secret recording because what “they’re asking me to do something that’s illegal, I believe, and I was worried." He also said that he told some teens whom he'd been ordered to issue a bogus summons, "they should take my name down and if they sue, they could use me as a witness.”

Inspector McCormack is inspected to testify next week. In a later part of the recording, which was not played for the jury, the Times reports that McCormack accused Serrano of trying to put words in his mouth, saying, "He’s adding on that I wanted him to stop every black and Hispanic." For more on all this, the Daily News has a giant photo of the type of audio recorder Serrano used.