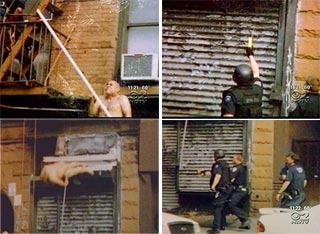 The police released a statement saying that the Tasering of a Brooklyn man who then fatally fell from a ledge seemed to have broken NYPD guidelines. Chief department spokesman Paul J. Browne said an airbag had been called to catch the victim, Inman Morales, but the lieutenant who issued the order for another officer to stun the man did not wait.

Morales, 35, who was apparently distraught as he stood naked on his fire escape and wielded a fluorescent light bulb, fell on his head outside his apartment building on Tompkins Avenue and later died at Kings County Hospital.

Browne also said, "None of the ... officers on the scene were positioned to break his fall, nor did they devise a plan in advance to do so." The guidelines say "when possible, the [conducted energy device] should not be used…in situations where the subject may fall from an elevated surface." The NY Times reports, "The lieutenant who gave the order was placed on modified assignment...while the officer who fired the device was given administrative duties." You can read the entire statement after the jump.

A witness told WCBS 2, "The mother was screaming, 'He's gonna fall, he's gonna fall!' And they said 'Ma'am step back.' They wouldn't allow the mother to talk to him."

On Wednesday, September 24 at approximately 1:50 PM, members of the NYPD’s Emergency Service Unit responded to the report of an emotionally disturbed person at 489 Tompkins Avenue in Brooklyn. The individual, Inman Morales, fled out the window of his third-floor apartment to the fire escape. After unsuccessfully trying to enter the apartment of a fourth-floor neighbor from the fire escape, Morales fled to the second-floor fire escape, and from there onto the housing of a roll-down security gate, which was 10-feet, five inches from the sidewalk.

As an ESU officer was in the process of securing himself on the second-floor fire escape, Morales jabbed at him with an eight-foot long florescent light. An ESU lieutenant directed another ESU officer on the sidewalk to employ a Conducted Energy Device (CED), commonly known as a Taser, against Morales, who fell to the sidewalk, striking his head. He was removed to Kings County Hospital where he was pronounced dead.

While officers had radioed for an inflatable bag as the incident unfolded, it had not yet arrived at the scene when Morales fell. None of the ESU officers on the scene were positioned to break his fall, nor did they devise a plan in advance to do so.

The order to employ the Taser under these circumstances appears to have violated guidelines, re-issued June 4, 2008, which specifically state that “when possible, the CED should not be used…in situations where the subject may fall from an elevated surface.”

The lieutenant who directed the use of the Taser has been placed on modified assignment. The officer has been assigned to administrative duties. The Brooklyn District Attorney has asked that neither officer be interviewed by the Police Department as the investigation into this incident continues.

#brooklyn
#fatal fall
#Inman Morales
#nypd
#stun gun
#taser
Do you know the scoop? Comment below or Send us a Tip