NYPD Blue Ready to Trade Up to Emerald City 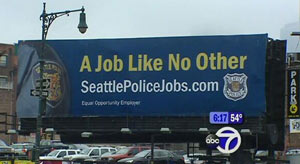 Responding to the siren call of higher salaries and a lower cost of living, about 200 cops showed up to take the four hour written exam to join the Seattle Police Department yesterday. Of the 200 who sat for the exam, it was estimated that the vast majority were from New York's police department. The New York Post reports that 148 of the test takers had at least one year experience in law enforcement already and the Daily News said that 72 of the test takers had at least two years on the job.

At issue is pay and the cost of living in New York City. One cop told the Post "I love it, but it comes down to pay. I can't afford to live in the city that I protect." Once officers leave the police academy, they earn a base salary of $32,100, versus $47,334 for rookies in Seattle. And the Seattle PD is offering a $5,000 bonus to cover moving expenses where one can live reasonably for a lot less money. Seattle's been pushing its recruiting with a huge billboard next to the West Side Highway.

The low starting salary for NYPD rookies was the result of a 2005 arbitration settlement that cut rookie pay and elevated the pay of veteran officers.

#cost of living
#entrance exam
#low pay
#nypd
#rookies
#seattle police department
#test taker
Do you know the scoop? Comment below or Send us a Tip
A new Gothamist is coming! We’ve moved comments over to our beta site. Click here to join the conversation and get a preview of our new website.