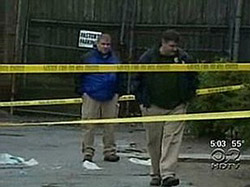 The NYPD is defending Officer Dawn Ortiz, who shot and killed a homeless man in Coney Island Thursday, saying that she was justified in firing at the man who was coming at her while swinging a chair. Paul Browne, spokesman for the department, explained, “Basically, was there an imminent threat to life or serious injury? That is the defining statement.”

More information has been released about Gilberto Blanco, the victim whose identity was at first unclear since had had no identification when the shooting took place. Cops used the cell phone found on his person to call his brother and learn that Blanco was an illegal immigrant who had entered the US last year. His brother told them that after struggling to find work lately, his brother had become depressed and was drinking heavily.

Christopher Dunn, a spokesman for the New York Civil Liberties Union did not sound like the book was shut on the case, saying, "When a guy with nothing more than a chair in his hands ends up dead, that raises lots of questions about the propriety of a police shooting.” Officer Ortiz has been assigned to desk duty after initially being taken to the hospital to be treated for trauma, standard procedures following such an incident.