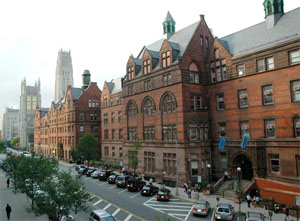 As the NYPD Hate Crimes unit, as well as the FBI and Justice Department, investigates the noose found outside a Columbia professor's office, Police Commissioner Ray Kelly commented about the school's cooperation. Apparently the school only turned over surveillance videos after the NYPD provided a subpoena - three days after the noose was found on Teachers College Professor Madonna Constatine's office door knob.

So far, the videos haven't provided any clues. There are no suspects yet. A professor who Constantine sued for defamation - it seems that Suniya Luthar felt Constantine was taking too much credit for a book they worked on - was ruled out as a suspect. And the NYPD is also investigating the noose noticed outside the the Church Street post office onThursday. Commissioner Kelly said it could very well be a copycat incident: "When something happens, we do have to be concerned that others might do it."

The Daily News also reports that Assemblyman Joseph Lentol will introduce "legislation to make displaying a noose a felony akin to showcasing a burning cross or a swastika." He said, "I think it is high time that the law recognizes the racial and historic hatred that a noose symbolizes." And Newsday looks at the ugly history of what the noose evokes.