Five years ago, the city changed the way it handled animal abuse complaints, with the NYPD taking over enforcement duties from the ASPCA. Now, the police department and animal welfare organization are touting the success of their partnership, noting there have been nearly 700 arrests and the treatment of 3,300 victims of animal cruelty.

Back in 2014, Dr. Robert Reisman, the supervisor of forensic sciences at the ASPCA Animal Hospital, pointed out why it made sense for the NYPD to take the lead on cases, "We had 17 agents, they have 35,000 uniformed officers. They have the manpower, they're out there every day. They know what's going on in their neighborhoods." And Howard Lawrence, vice president of ASPCA Humane Law Enforcement, said today, "The NYPD has not just been our partner in helping stop animal abuse but also identifying pet owners in need through their work in the community. Sometimes even the simplest service, like food or grooming, can mean the difference between an animal ending up in a shelter or staying in a home with a loving owner."

This video shows some of the rescued abused animals, who are now happy in their furever homes—have your tissues ready!

We asked the ASPCA for details on the animals in the montage, so here are the happy tails:
- Joe was recently adopted by one of the police officers who found him abandoned and chained to a fence.

- Fraggle, who was found in 2015, abandoned in a suitcase left in a trash can in the Bronx; his human told us, "When Fraggle greets me with a hug and looks up at me with this little smile that beams with pure love, I feel God’s love and blessing."

- Lacey, a brindle pit bull, was beaten with a shovel and left in the snow (her owner was convicted and sentenced to a year in jail); she's now called Peanut Butter and "falls asleep on her back with all four legs in the air."

- Charlotte, the white poodle mix, was beaten and left in a trash can; after recovering from serious head and back leg injuries, she adores her human Jeannette, who takes her to work. 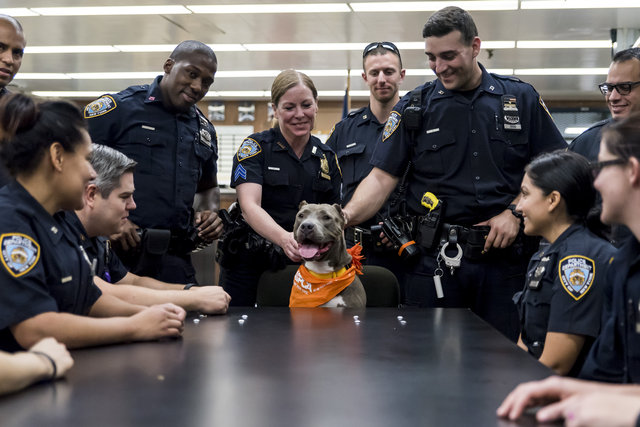 - Jamie, the grey pitbull who was rescued from terrible living conditions, now has loving parents and was even met up with her daughter, who was also rescued!

- Tan pitbull Orson had been in a dogfighting ring and was eight years old and deaf when he got to the ASPCA. He had to wait over a year for his new family, but it was worth it. His new dad was wary of pitbulls at first but now says, "Now, I love pit bulls. They’re great dogs, I’ll never be scared of one again. To me, this is one of the best dogs I ever had. I say give the pit bulls a chance, there’s a lot of dogs that need help.”

- King, a grey and white cat, was caught on video when a man kicked him in the air. Rescuers found King, who was treated his injuries and was later adopted. His new owner said that King loves meatballs ("maybe he's part Italian?") and that he's "a fun cat—and a bit of a tough guy. I suppose that’s how he survived.”

- Chaplin, a grey and white shih tzu, was found abandoned in a Brooklyn building with matted hair. The matting was so extreme that his right front leg lost circulation and had to be amputated. But whilePolice Commissioner James O'Neill had Chaplin for "Take Your Dog To Work Day" last June, one of O'Neill's officers, Vito Campanelli, "texted a photo of the pooch to his wife, Daphne, who quickly contacted ASPCA staff to arrange a meet and greet." The Campanelli family adopted Chaplin and took him home a few days later. 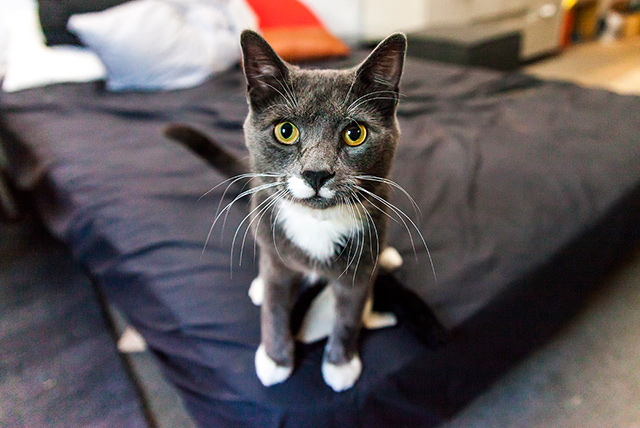 - Juice, a caramel pittie, was found malnourished with multiple wounds, tied to a police in a construction site. A college student who had a summer job with the ASPCA decided to adopt him, "I was able to play fetch with him. That’s when I realized what a sweet dog he was... I’d realized that a lot of adopters came in and immediately said no to him. No one wanted to take him home because they didn’t get to see him the way that all of the employees saw him. That’s when I realized that he was the dog for me.”

The ASPCA supports the NYPD's efforts investigating animal cruelty cases, including offering a 24-hour hotline funding a "fully-equipped mobile command post" to assist with large scale animal cruelty investigations, and also made sure each precinct has a pet microchip scanner. New Yorkers can report animal cruelty events through 311 or with an online complaint; for crimes in progress, people are urged to call 911.