You've probably seen the videos by now: A mob of uniformed Proud Boys and right-wing skinheads gleefully circling a handful of protesters; cries of "faggot" as they kick and stomp a person lying in the fetal position on the sidewalk; a dazed protester punched into a car and shoved to the ground.

Amid the chaos, members of the NYPD's Strategic Response Group arrive on scooters, and video appears to show one of the officers witnessing a protester getting punched. Yet police let the attackers casually disperse, shouting Proud Boy slogans and Brett Kavanaugh references—"I LIKE BEER!"—into the Upper East Side night. They pose triumphantly for a group photo as they make their way toward Park Avenue, trading tales of their violence: "I had one of their heads and I was just smashing it into the pavement," one brags. "That son of a bitch. He's a fucking foreigner."

At no point do any of the Proud Boys seem the least bit concerned about the three police officers who witnessed the tail end of their beatdown. Likewise, the NYPD officers do not apprehend or question any of the Proud Boys as they walk away. Police said none of the victims pressed charges or received medical attention at the scene.

On Saturday morning, a police spokesperson told Gothamist that there was no open investigation into the Proud Boys' conduct.

"The NYPD rolled up when the attack was happening and just stared at it slack-jawed," recalls Shay Horse, an independent photojournalist who documented the incident. "I had to shout at them to do something. One of the Proud Boys who kicked the protesters was just standing next to the cop smiling afterward, and they casually let him walk away."

Throughout the night, Horse says, the NYPD's Strategic Response Group seemed more preoccupied with left-wing activists, who'd gathered outside the Metropolitan Republican Club to protest an appearance by Proud Boys-founder Gavin McInnes. In addition to offering Proud Boys a police escort into and out of the building, police stood by as McInnes brandished a sword in the street, as part of his promised reenactment of the assassination of Japanese socialist Inejiro Asanuma, who was murdered while giving a speech in 1960.

On Sunday, the Metropolitan Republican Club released a statement defending their decision to invite McInnes, and blamed the violence on protesters, who earlier in the week vandalized the clubhouse. "We cannot thank the NYPD enough for all their efforts to keep everyone safe and allow our event to take place," they wrote.

Gavin has, on several occassions, talked about how he advocates for violence as much as possible, because it's "so effective". There is ZERO chance that nobody at your club knew about that.

On Saturday afternoon, after footage of the incident went viral, the department released a statement noting that three individuals had been charged with assault, and that they were working "to determine if other crimes had been committed." The three people they arrested were reportedly antifascist protesters who, in a separate incident, allegedly punched a Proud Boy and stole his backpack, police said. As of Monday morning, the NYPD had not arrested anyone involved in the assaults captured on video.

While the department claims to be soliciting information via a tip line, video journalist Sandi Bachom—who captured footage of the fight and of the Proud Boys leaving the club—says that the officer who answered the phone was uninterested in her help. "He said it wasn't 'on his radar' and he was really condescending," she told Gothamist.

Bachom says she eventually approached the 19th Precinct and was rebuffed again, and was only able to get the footage in front of detectives after contacting City Council Speaker Corey Johnson's office. (Johnson's office is hosting a press conference outside the club to condemn the incident at 3 p.m. today; while Rep. Carolyn Maloney and Comptroller Scott Stringer plan "to call for action" at 5 p.m.)

In the view of some legal observers, the NYPD appears willing to give the benefit of the doubt to pro-police groups like the Proud Boys, while cracking down on those affiliated with movements more critical of police, like Black Lives Matter or antifa.

"We saw that their treatment of the Proud Boys was incredibly deferential," said Gideon Orion Oliver, an attorney and the former president of the New York chapter of the National Lawyers Guild. "Not only did [NYPD] do nothing to intervene, but it's pretty apparent that they didn't investigate in a serious way, and instead arrested people they perceived to be protesters on the Proud Boys' word." 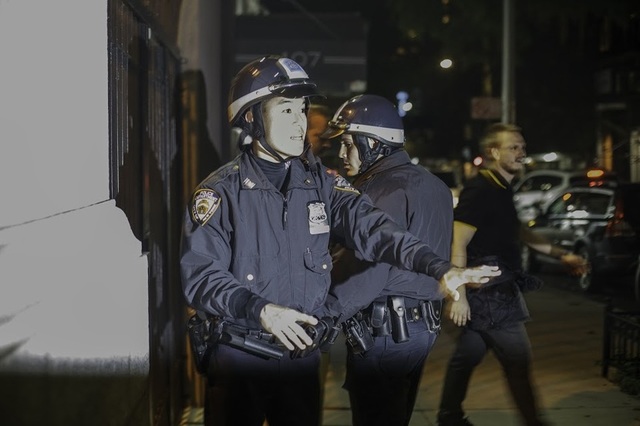 Oliver noted that the NYPD's Strategic Response Group typically has a zero tolerance policy during protests, which in the past has led cops to do things like arrest Black Lives Matter activists on jaywalking charges, or infiltrate anti-war demonstrations hosted by cyclists. "You can substitute a bunch of different groups—anarchists, people of color, Muslims—and see that the way police treated the Proud Boys here is much more favorable," he added. "That's scary."

In other parts of the country, police departments have also come under fire for protecting and fraternizing with Proud Boys, despite the group's history of political violence. During last summer's deadly white nationalist rally in Charlottesville—which members of the Proud Boys, including some reportedly involved in Friday's assault, took part in—police were criticized for aiding the right-wing extremists. In one instance, Charlottesville police failed to to issue arrest warrants for neo-Nazis caught on video brutally beating a black man until weeks later, when public outcry had reached a fever pitch. (On the word of the neo-Nazis, the victim, Deandre Jordan, was also charged with a felony, which was later dropped).

The NYPD has ignored multiple questions about why the Strategic Response Officers did not arrest or question any Proud Boys on Friday, or whether they've conducted interviews with Gavin McInnes or other known members of his group in the days since. While the department's Twitter account has shared video stills of three "persons-of-interest," it hasn't mentioned anything else about the dozens of others who were caught on video participating in the assault.

We continue to investigate the violent incident on the UES on Friday night, and need information regarding these persons-of-interest. no complaints have been filed; If you were the victim of a crime, or have information about the incident, please call 1-800-577-TIPS. @NYPDTips pic.twitter.com/27hiXunk61

Mayor Bill de Blasio and Governor Andrew Cuomo have both released statements condemning the violence and, predictably, the two are now squabbling over whether State Police should be involved in the investigation. (Cuomo has also called for an FBI investigation into the incident.) But each has also stopped short of questioning the NYPD's response, and instead urged New Yorkers to reach out to the police with any information about the assaults—statements that Oliver says are "really not enough."

"Elected officials should be calling for answers and accountability from the police department for what just happened," he said. "Telling people to call the police when they're clearly not using their power in an equal manner really misses the point."

#gavin mcinnes
#metropolitan republican club
#nypd
#proud boys
#upper east side
#original
Do you know the scoop? Comment below or Send us a Tip