A Brooklyn woman says she was bashed in the head by NYPD officers who were violently breaking up a family event at the Marcy Houses in Brooklyn this weekend.

Ja-nay Graham, 29, claims police had just arrested her nephew on disorderly conduct charges when she arrived at the hectic scene and began recording. Moments later, she says, an officer clubbed her in the side of the head with a baton. The resulting gash required five staples to close, and has left her with concussion symptoms.

Graham, who was not charged with a crime, is one of several New Yorkers alleging a "barbaric" spate of police violence outside the Bed-Stuy housing project on Saturday night.

Her nephew, Jeffrey Lloyd, says he sustained shoulder and back injuries after he was punched by officers while handcuffed. Two others—Lawrence Lee and Ron Fernandez—were allegedly beaten by multiple cops, forcing each to undergo jaw surgery (Fernandez was injured early Sunday at a Bainbridge street development, also in Bed-Stuy.) Another woman, Uniqua Silver, says she was nearly blinded after cops slammed her face into a car door outside the Roosevelt Houses. 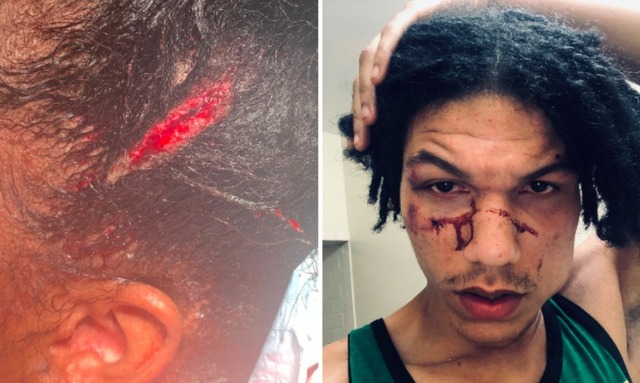 Ja-nay Graham, left, and Lawrence Lee, right, say they were beaten by police on Saturday. (Courtesy of Sanford Rubenstein)

On Wednesday, the five alleged victims appeared together alongside civil rights attorney Sanford Rubenstein to announce a lawsuit against the city and the NYPD. Rubenstein is also calling on the Brooklyn District Attorney Eric Gonzalez to open a criminal investigation into the officers' actions.

"There is a new epidemic of police brutality in New York City," he said. "We need to hold these police accountable criminally when they commit criminal acts against individuals who have done nothing wrong,"

The chaotic scene erupted in the aftermath of Family Day at the Marcy Houses. Attendees said the event was joyous and peaceful, until police arrived at around 11 p.m. and began pepper-spraying residents in an effort to break up the gathering.

"It was a good day, no fighting or nothing," said Graham. "Then the cops showed up and started chasing kids, spraying mace at everyone. It was all so excessive and unnecessary."

Frankie Colon, a 27-year-old East New York resident who grew up at the Marcy Houses, shared a similar account with Gothamist. He'd attended the annual outing with his mom, then spent much of the evening hanging out with old friends. As they were walking between the Marcy and Tompkins Houses at around 10 p.m., he said, a swarm of police descended on them without warning. (Colon is not involved in the lawsuit, and does not know any of the plaintiffs.)

"Next thing you know there are like two or three vans of cops that show up. They're yelling, 'Go home!' We're just like standing there talking about basketball," Colon recalls. "Then they start pushing and pushing people, screaming 'Get the fuck out,' using the pepper spray. It's like Martial Law."

Just was in the middle of a riot on my way home from the deli. Cops beating people up, spraying people with mace, slamming people's heads into car windshields.. i had permission to film the first guy pouring milk into his eyes, the concerned guy telling me to stop filming wasn't aware.. but anyways #marcyhouses check out all the police running there was about 40 of them update: someone was shooting from the roof across the street...

Colon said that a few people started throwing glass bottles "in response to the police taking it too far and trying to make us go home." Gunshots were also heard coming from a rooftop, the NYPD said. No one was reported hit.

Eleven people were arrested on disorderly conduct charges following the skirmish, including four of the plaintiffs in the lawsuit. Three officers said they suffered minor injuries, prompting the NY Post to declare in a front page story that "roving, cop-hating mobs" were sowing chaos in the streets. The depiction of Family Day mayhem made it to national television, courtesy of Fox & Friends.

"It's not like that," said Colon. "I understand there's different kinds of hanging out, but there wasn't any problem here."

Sergeant Mary Frances O’Donnell of the NYPD said the matter is under internal review. A spokesperson for Mayor Bill de Blasio, Freddi Goldstein, said that a Community Affairs Unit claimed they were "attempting to break up a possible altercation between two large, very intoxicated rival groups." Those officers have met with residents at the housing complex this week.

A spokesperson for the Brookly D.A.'s office declined to comment.

#nypd
#police brutality
#police misconduct
#original
Do you know the scoop? Comment below or Send us a Tip