NYers Show Up in Force for Pope Benedict, Even Giuliani 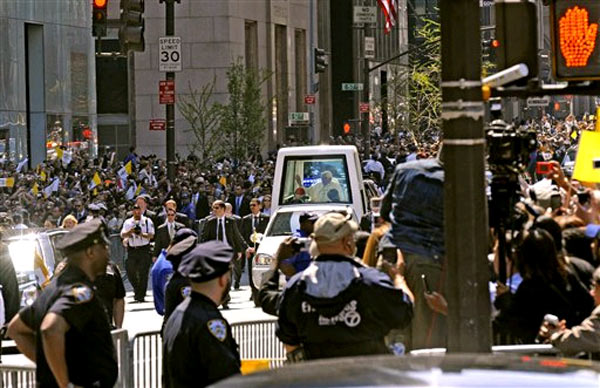 Yesterday, thousands of people lined Fifth Avenue for a glimpse of Pope Benedict XVI. After giving the first ever papal mass at St. Patrick's Cathedral--and having a private lunch with Cardinal Egan--Pope Benedict emerged in his Popemobile to cheering crowds. Before his only Popemobile trip, the pontiff asked the audience at St. Patrick's for greater unity in the Catholic church.

One of many heartwarming stories: A Secret Service agent plucked a little boy with muscular dystrophy and his mother from the crowd to attend the mass. Mother Beverly Ruiz, who traveled from Texas, said the Pope "came over and blessed him, and my son just smiled. It's just a miracle in itself, there's no way to describe it. It's just an absolute miracle that this happened in our lives."

Another maybe-miracle: Rudy Giuliani managed to receive Holy Communion at the mass, which isn't technically allowed since he's three-times married and is pro-choice.

On Saturday afternoon, Pope Benedict went to St. Joseph's Seminary in Yonkers, where he blessed a number of disabled children (read the text here) and attended a youth rally where Kelly Clarkson and other entertainers performed. But if you get to His Holiness' actual text, you'll find it, as David Gibson writes, "very meaty, very encouraging, very Benedictine."

Today Pope Benedict will visit Ground Zero and meet with a small number of September 11 survivors and victims' families and later give a mass at Yankee Stadium before going back to the Vatican. You can see the Ground Zero visit and Yankee Stadium mass on local news stations or online (at the websites of WNBC, 7online, WCBS, MyFox).