We've all been there. Late to daycare, late to school, late to a doctor's appointment, uncomfortable or scared for our personal safety because of crowded, unreliable, breakdown-prone subways. Now the experience of hordes of long-suffering straphangers has been memorialized in a pamphlet (below) of subway horror stories compiled by the activist group Riders Alliance. The Alliance is pushing for Gov. Cuomo to fill the $14-billion budget gap in the MTA's five-year capital improvement plan. Cuomo has called the budget, which would fund repairing stations and lines and replacing aging equipment and subway cars, "bloated." The Alliance rejects that notion.

"[Cuomo is] basically asking the entire MTA to do their job on a shoestring budget," Alliance spokesman Nick Sifuentes said, noting that Cuomo and predecessor David Paterson have raided more than $100 million from the MTA. 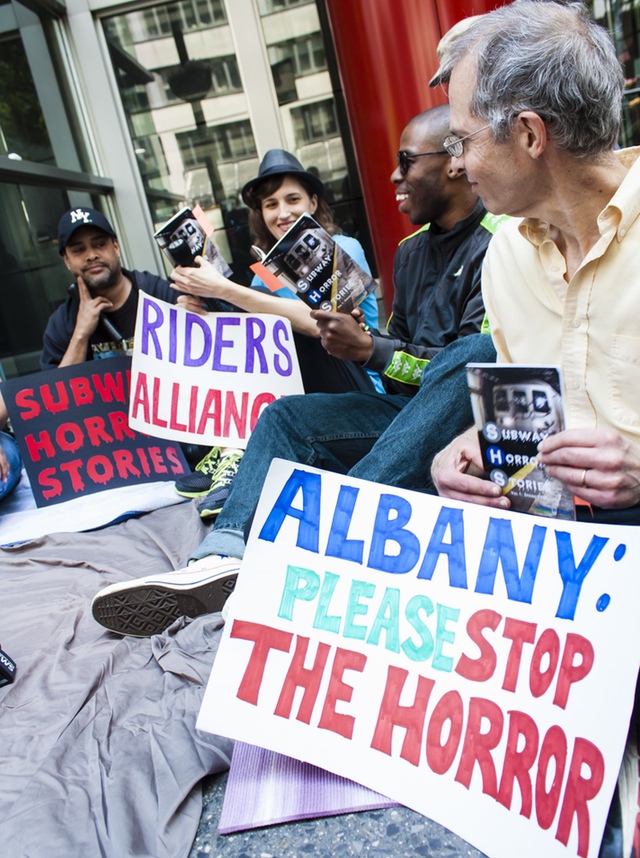 Yesterday, the group staged a read-in protest, with activists sharing subway testimonials around a mock campfire outside Cuomo's Midtown office. It can be easy to shrug off individual inconveniences once you've arrived at your destination, but the cumulative effect of 30 pages of subway mishaps is hair-raising. There is a missed job interview, a four hour trip to nowhere, a man with a baby getting shoved in a crowd at the Bedford L station, and a woman whose leg is broken when she is shoved off of a crowded train. The catalogue of catastrophe is cattily dedicated to Cuomo, with the tagline "this book would not have been possible without you."

Here is just a small sampling of The Horror:

The Riders Alliance is also asking Gov. Cuomo to come ride the subway during rush hour so he can experience some of this brutal truth for himself. So far the group's invitations have gone unanswered, Sifuentes said. Members plan to present the little book of horrors to legislators in Albany next week.

We have reached out to the Governor's Office to see if he is having any second thoughts about starving the MTA, and we will update if we hear back.

The full Riders Alliance pamphlet is below, and we appreciate the group getting the colors of the letter bubbles to correspond with actual lines, unlike say the logo for this year's NBA All-Star Game.