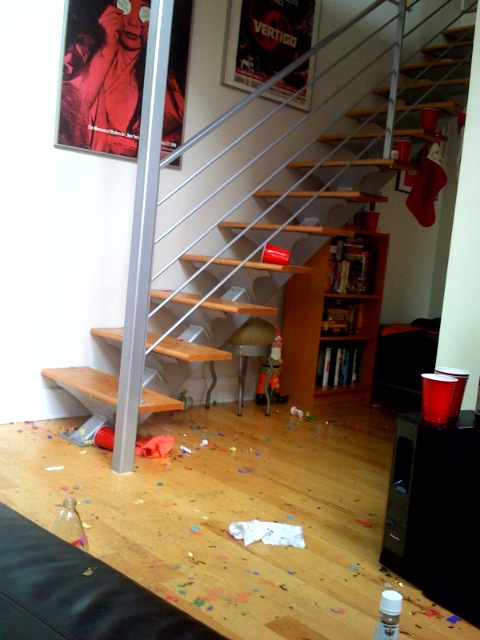 New Year's Eve wasn't all confetti, LED-lit crystal balls and...diapers; despite the impression Dick Clark gives to the world at large, there's always just as much excess, overcrowding and diminished expectations to be found outside of Times Square on Amateur Night.

Last night we received a tip from Gawker containing this link about post-NYE detritus in one of those sleek Williamsburg condos. There was spilled wine, a hole in the wall and an unused tampon left on the couch! Crazy, right? The mess was so unmanageable that the hostess had no choice but to summon the maid and blog about it while the glitter was scrubbed from the hardwood floors. She's demanding the guests reimburse her for the cleaning service, but since she writes for Gawker Media, maybe she'll get a cut of the page view paycheck to help defray the clean-up costs?

Take a look at the photos and let us know what you think: Should the rowdy bastards have shown some restraint and maybe refrained from pouring champagne "from the second floor into Callie's mouth on the first floor"? Or is this degree of decadence to be expected after the hostess herself puked and passed out mid-party? And what happened to her date?

New Year's Eve in New York does have a tendency to turn into a nightmare, what with the hassle of getting a cab, a bartender's attention or even some basic human dignity. We got a tip from one of our own who made reservations for a prix fixe dinner at Italian restaurant PT, only to find the establishment shuttered upon arrival. What's the worst that happened to you, besides too much Ryan Seacrest?