"At the moment we're still in that state of emergency, we still have more to do," Byford said, referring to the "state of emergency" that Governor Andrew Cuomo declared in the summer of 2017. "And every day the system literally gets older, the infrastructure gets older, the pressure on the system increases, so the need to bite the bullet and deliver on this plan becomes ever more compelling."

The main planks of Byford's Fast Forward plan, which is laid out over two five-year phases, would modernize the system's ancient signal system ("the single most transformative thing" that can be done to fix the subways as he put it), revamp bus routes enough to stop plummeting ridership, and make subway stations accessible enough to disabled New Yorkers so that in five years, every subway station will sit within two stops of one that is accessible. Byford is also pledging to fix the culture of the MTA, and referred to working groups that are looking into improving transparency and cost containment.

The transit chief also pointed to some hopeful signs: "major incidents" involving 50 or more trains are down by 11%, average wait times are "trending down."

"We are having a blitz on customer restrooms," Byford added.

Still, right now, the subway system is historically terrible at getting people from point A to point B without disruption or delay, and several councilmembers pointed this out when they asked Byford about a planned fare hike in the first half of next year.

"If your train systems are not largely working, should New Yorkers have to pay for something that's broken and not really working?" Queens Councilmember Donovan Richards asked. "Would you mark up the price on a lemon—a lemon is considered a hooptie, a horrible car?"

Byford said that the MTA's board was ultimately responsible for approving any fare hike—which would either keep the base fare at $2.75 but eliminate bonuses on unlimited MetroCards, or raise the regular fare to $3 but keep bonuses—but added that a massive decrease in ridership would cause a death spiral. The MTA is projecting a $244 million deficit next year without a fare hike, which would balloon to $1.6 billion in 2022. 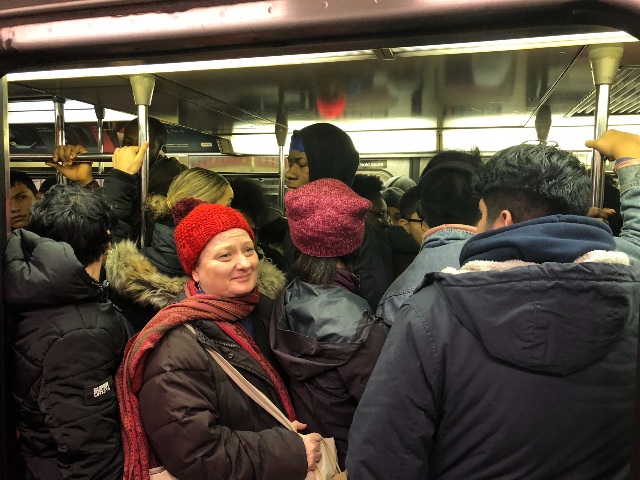 Totally not a massive downward spiral on the 1 train this morning. (Ben Yakas / Gothamist)

Byford and the City Council agreed that the MTA needed to find new revenue streams immediately, with congestion pricing and Mayor Bill de Blasio's "millionaire's tax" both getting many mentions ("I think it should be both," Transportation Committee Chair Councilman Ydanis Rodriguez said). The most popular congestion pricing plan would bring in around $1.5 billion a year, a millionaire's tax around $700 million. Sources recently told Politico that an MTA task force is circling around a number to both enact Byford's Fast Forward plan and get the rest of the MTA in a state of good repair: $60 billion.

"Congestion pricing will go a lot towards our needs. Will that suffice? No," Byford said. "We still will need other mechanisms."

Byford was living in London when that city initiated congestion pricing over what he called "siren voices, people saying, 'It's not going to work.'"

"It was striking to see the impact on day one. Absolutely striking."

Councilmembers also pressed Byford on comments he made Monday, in which he blamed a policy change by the Manhattan DA's office to not arrest farebeaters for a decline in revenue of around $200 million, and said he would think about stationing MTA employees at entrances to deter anyone who might be thinking about jumping a turnstile.

NYPD Chief of Transit Edward Delatorre told reporters at a press conference that officers have made 6,248 stops in November, a 25% increase over 2017. The new policy favors summonses over arrests, which the police say are largely made for "persistent offenders."

"So what’s happening now is because of our new policy, officers are free to make more arrests and spend more time on a platform instead of getting tied up with other arrests," Delatorre said.

"If you cover your license plate, you run over a toll the worst case scenario would be a ticket from a police officer. If you're a black kid jumping over at turnstile the worst thing that could happen is you could go to jail," Brooklyn Councilmember Antonio Reynoso told Byford. "We're not targeting more affluent car owners but instead targeting mostly young people of color. That is the equity issue. This problem is not necessarily the fact that you need your money."

Byford himself offered to be a turnstile monitor, and pledged that he would do everything he could to prevent racially imbalanced stops.

"We will be explicit in our instruction and our direction to the NYPD to be very, very careful not to target certain communities," Byford said. "I cannot stress that enough. You have my commitment in a public forum on that."

A recent survey of subway farebeating arrests by The Marshall Project published in Gothamist showed that 89% of those arrested are Black or Latino, a percentage that is virtually unchanged since 2014.

Asked after the hearing why he seemed so fixated on turnstile jumping giving its relatively minimum impact on the MTA's $16.6 billion operating budget, Byford said he compiled that farebeating analysis "because I was mandated to report back to the [MTA] board."

"The figure that we quoted, $215 million, may not seem big in the grand scheme of things, but that’s still a chunk of money that’s not going towards improving transit, making it more reliable, buying new vehicles, improving stations. You know, I’ve got to be fair."

At the end of the hearing, which stretched more than three hours, Councilmember Rodriguez said he wanted the City to chip in money to fund Fast Forward.

Staff for both City Council Speaker Corey Johnson and Mayor de Blasio both told Gothamist that they supported the Fast Forward plan, but declined to say whether the City should help fund it. The state and city will come up with their budgets in April and June, respectively.

"I genuinely do believe this is within our grasp," Byford told reporters after the hearing. "The key now between now and spring is to convince stakeholders in Albany, City Hall, and for that matter in Washington, that this is a plan worth investing in."

#andy byford
#buses
#City Council
#fast forward
#MTA
#subway
#original
Do you know the scoop? Comment below or Send us a Tip