Mitchel Volk is arguably the most influential meteorologist in New York City. From November through April, he is the Sanitation Department’s secret weapon, providing detailed forecasts to the city officials in charge of salting and clearing snow and ice from 6,000 miles of pavement.

Unlike his peers on television, Volk can’t afford to be hyperbolic. “Every decision could mean millions and millions of dollars,” Volk says. “If I’m telling them they’re going to have to plow because there’s going to be six to seven inches of snow, they call everybody in, and if it doesn’t happen, they’re spending millions of extra dollars on nothing—I’m not gonna have the city do that. I’m here to save money for the city and also save lives.”

From his desk on Beaver Street in Lower Manhattan, Volk studies computer models and weather patterns on two computer monitors and sends out his predictions on upcoming storms several times a day, including a breakdown of snowfall odds for Central Park.

“We take what he says very, very seriously,” Garcia says. “He was the first of the meteorologists to talk about this storm back last weekend. I think the first note from him said, ‘Stop worrying about the flurries we’re going to get on Sunday and pay attention to the fact that I think something big is happening.’”

It takes the Sanitation Department between 12 and 18 hours to outfit the trucks with plows, and workers need at least 24 hours notice that they’ll have to come in to plow.

“Having really good forecasts is very important to us so that we can efficiently utilize our resources,” Garcia says. “I can push him pretty hard on, what’s the timing? What are the accumulations? And give me, based on the models, what’s the probability of different accumulations? It’s very useful to be able to follow up when you have questions and get very specific answers.” 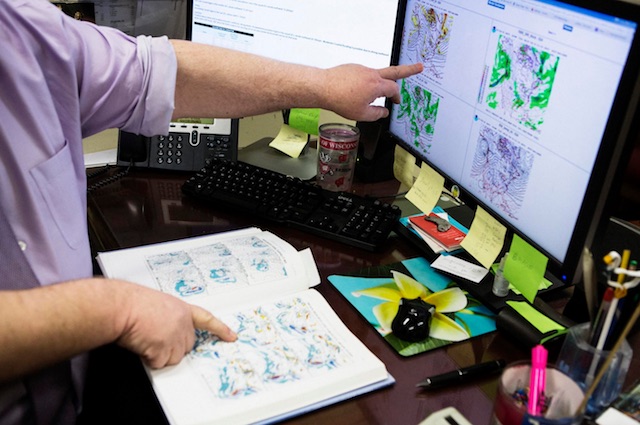 As a teenager living in Oceanside, Long Island, Volk remembers being fascinated by the blizzard of '69—which dumped 15 inches in the city and more than 20 in his hometown—and he would eventually earn a masters in meteorology and climatology from the University of Wisconsin—Madison.

Unable to find any steady meteorology work, he moved back to New York City in 1982 to become a researcher for the Department of Health. “I had friends who had AIDS, so I figured if I can’t do meteorology let me do something for AIDS,” Volk says. He also sold a few paintings.

“I had shows in SoHo and the East Village, and I met Keith Haring and Jeff Koons, but of course art is like meteorology, maybe even more competitive.” Some of Volk’s paintings currently brighten his otherwise drab municipal office. “I call it geometric surrealism," he says.

After a brief stint at NYCHA, Volk ended up at Sanitation in 2009. In addition to his position as in-house meteorologist, Volk researches injuries and illnesses in the department, though the weather demands his constant attention.

“You have to look at the weather 24/7, if you don’t, you lose track. You won’t be as good, and accuracy is very, very important.”

New York City's tendency to retain heat, and its proximity to warm ocean temperatures and pockets of cold, northern air make it "one of the most difficult places in the world to forecast snow,” Volk says. 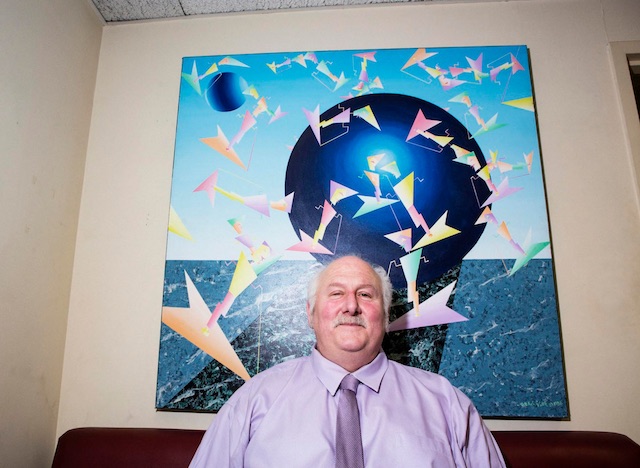 Volk in front of one of his paintings (Jessica Lehrman / Gothamist)

“Baltimore had a big snow storm a few years ago where they had 20-24 inches. I was pulling my hair out saying, no snow in the Bronx, 1-3 inches in the city, up to 5-6 inches in southwest Staten Island, and up to 18-20 inches in New Jersey, but that’s really hard to nail.”

Volk predicted the infamous Boxing Day Blizzard of 2010 while he was on vacation (“I was with my friends at a mall in Wisconsin looking at weather maps sending emails to the snow chief and to the commissioner.”) but he says his proudest moment came a few weeks later.

“I called that 19-incher. The models were all going six to seven, but I saw the upper-level pattern and I thought, this is going to be a ton of snow. That was my proudest forecast, even though no one remembers.”

As Volk showed a reporter how weather models from the Blizzard of ’96 resembled those from this weekend’s storm, a group of his colleagues announced they were going home for the evening.

#dsny
#Mitchel Volk
#snow
#Mitch Volk
#meterology
#original
Do you know the scoop? Comment below or Send us a Tip