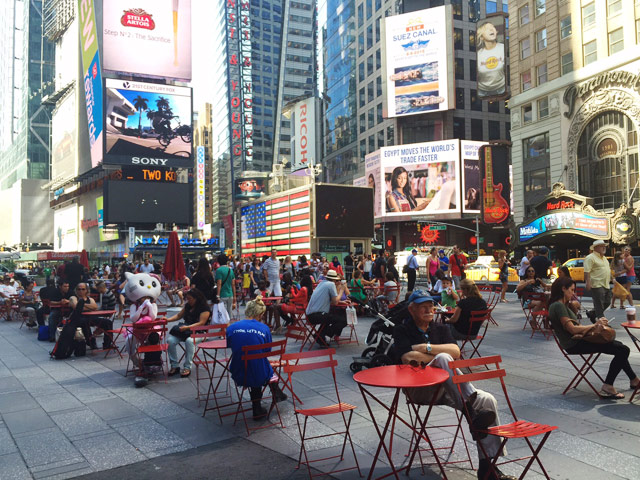 I want to emphasize that I was able to walk because I went through the pedestrian plazas that Mayor Bill de Blasio has basically threatened to remove or at least reconfigure. When I'm walking on the west side of Broadway, it's so packed with people that I tend to walk in the street. So I'll disclose that I LOVE the pedestrian plazas. If we didn't have the plazas, we'd probably have many more pedestrian injured or killed by cars. And we wouldn't have communal moments, like when a crowd gathered to watch the Mars Curiosity land earlier this month:

It's also pretty insane (and sexist) that the topless women of Times Square are what's getting de Blasio's attention, just because of some hysterical coverage in the Daily News. There's excellent conspiracy theory work by the Times Square pedestrian plazas' #1 hater, the Post's Steve Cuozzo: "Simply, the misery the plazas have brought to tenants of Times Square’s office towers — prominently including one majority-owned by Boston Properties, the company of News publisher Mort Zuckerman."

You can also read our Ask A Native New Yorker column from yesterday, which submits a similar theory: "The New York City papers, like the major TV and radio stations, are controlled by billionaires, and reflect their preferences and tastes. When they're not actively pushing for regressive policies like charter schools, the elimination of unions, and luxury development, they have to provide a steady stream of distraction or else the locals might begin to notice they're slowly being evicted from the city."

But who cares what a native NYer thinks? Since city officials make a huge deal about how important tourists are to the city's economy, I spoke to a few of them yesterday. Geraldine Crowley, of Ireland, was sitting in a pedestrian plaza with a coffee. This was her first time in New York: "I wanted to come to Times Square," she said.

Danielle and Blake, a couple from San Diego also visiting NYC for the first time with their sons, ages 7, 10 and 13, had heard about the growing furor over the plazas (and the desnudas). Times Square was on their list of must-see's: "We did the Statue of Liberty, 9/11, One World Trade Center, Top of the Rock, a helicopter ride, Chelsea Market," Blake said. "Today we're doing Lombardi's Pizza, Junior's, Serendipity 3, and maybe Central Park."

Danielle said removing the plazas "would take away from what we'd want to see," adding, "We wanted the boys to see Times Square." Even their 10-year-old son declared Times Square to be "ish."

"We're from Orlando, so we're used to tourist traps," Lindsay, 28, who was visiting with friends and lingering around the plaza, told me. "This is a signature of New York City." If the city really removed the bountiful public space, "It would take the character away."

Naked Cowboy Robert John Burck held court with at least six different media outlets as his Naked Cowgirls—his wife and her sister—milled around in their bikinis. Burck matter-of-factly said of his 16 years-and-counting stint, "I'm the model of how to be successful in Times Square," pointedly adding, "I don't bother people," referring to the aggressive Cookie Monsters and, allegedly, desnudas.

Obviously, he's fond of the plazas. "I love it. It's cut down on traffic incidents and now there are events all the time," he enthused. "Before, I would be mowed down...Over 400,000 people through every day... It's a place for people to stay and congregate."

Burck, who has licensed his Naked Cowboy brand to other cities, is also pretty pragmatic about the hubbub, "They'll never tear out the plazas." He pointed north, "See that? The Department of Transportation is working on a plaza there. It'll take decades to pull them out," and was dismissive of detractors, "These people say those brash statement to get their names in the paper."

An admitted conservative ("I'm from Ohio"), even Burck thinks de Blasio is getting a bum rap for some things. "You can't blame [the rise in] homelessness on de Blasio... they were just somewhere else" earlier, he posited.

He believes the Times Square Alliance, who has been grappling with the issues of costumed characters, should set the standards for the performers in the plaza. The Times Square Alliance has to navigate the issues of being topless and panhandling (both legal and constitutionally protected), and while there is a proposed law to handle costumed performers, there are concerns that minorities and immigrants will be over-criminalized.

A new idea floated by the Alliance and elected officials is that the performers would be put in special areas, basically "Freedom pens." Tim Tompkins, president of the Times Square Alliance told the Post, "It recognizes the importance of free speech and creative expression in Times Square. But [the plan] also offers a constitutionally acceptable mechanism for containing aggressive behavior and allowing people to choose, rather than be forced to, interact with characters and solicitors."

Governor Andrew "What Can I Say Today To Undermine De Blasio" Cuomo has now somewhat backtracked on his comments: "Taxpayers spent a fortune cleaning up 42nd Street. So my point was, we’re not going back to the old days... If the solution is breaking up the plaza, obviously I think that would problematic for a lot of people, but let’s see what he’s proposing first."

Even Steve Cuozzo of the Post, admits, "[F]or better or worse, the plazas can’t be made easily to go away. The city has spent nearly $40 million on infrastructure and repaving to somewhat beautify the original, schoolyard-like original plazas — and to make them permanent. As awful as they remain, they’re an ineradicable part of Midtown."

Daniel Dawson, a Manhattan resident who lives a few blocks away, was sketching at one of the plaza's tables. Originally from Manchester, England, he confessed he usually tries to avoid Times Square, but he enjoys the plaza, "It's well-used... It's a nice oasis in the craziness."

P.S.: Anti-Semitic Elmo was a thing during the Bloomberg administration.