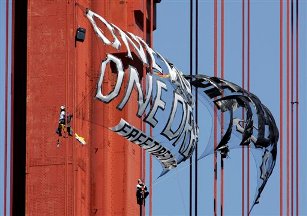 The Olympic torch is only visiting San Francisco in the United States, and torchbearers from around the country will be participating. Environmental activist Majora Carter told the News:

"I'm grateful that I live in a country where you can say things like this," said Carter, 41, who heads Sustainable South Bronx and is co-founder of GreenForAll.org, which finds environmentally friendly jobs for poor people.

"I completely understand the whole controversy about China, but I just think that we should look at this in the spirit the Games represent," Carter said. "It's about unity, it's about respect and it's about reaching across boundaries in the spirit of sportsmanship."

Yesterday, SF Mayor Gavin Newsom emphasized that the Olympic torch route is "not fixed" and, today, the torch arrived under security usually "reserved for head-of-state visits."

In 2004, the Olympic torch was carried through NYC (P. Diddy and Chuck Close were among the torchbearers). The Olympic Flame went out on while on the Staten Island Ferry, but there's always a standby flame.