New York's Nepali community is reeling with shock and sadness from the country's worst earthquake in 80 years, but the instinct to send assistance has helped to temper the dread of not knowing whether friends and family back home had survived.

In Jackson Heights, where the Nepali community is concentrated alongside many other Southeast Asian communities—Bangladeshi, Pakistani, Indian—Pralay Raj Bhandari's group, the Nepalese Football Club, helped organize a fundraising march through the neighborhood over the weekend that he says collected $24,000 for earthquake relief efforts.

Bhandari was standing in Diversity Plaza, where candles were lit for a memorial for the missing and dead back home. He said he still had not spoken with most of his friends in Nepal because of widespread electrical and cellular network outages.

“My dad is calling me every few hours, and he just called me half hour ago saying there was another aftershock,” Bhandari, who came to New York from Nepal eight years ago, told Gothamist. 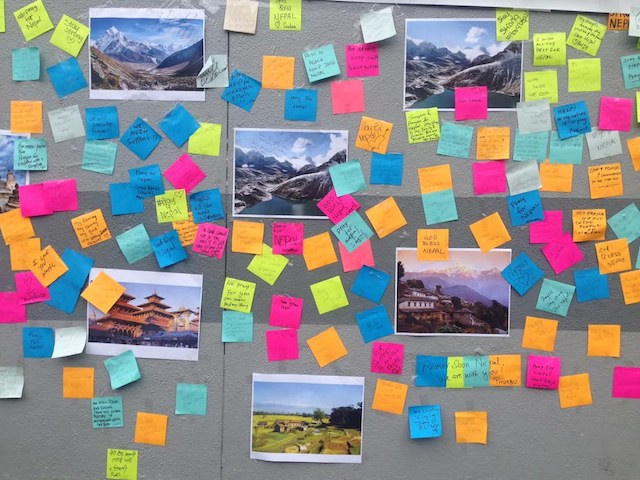 Near the collection of candles is a wall adorned with multicolored sticky notes with messages of hope. Interspersed among the notes are printouts of Nepali's breathtaking mountain landscapes, which Prasana Malaa, a web developer who emigrated to New York from Nepal in 2008, says he posted to counter images of destruction streaming from the media.

“Communication is the biggest issue [in Nepal after the earthquake],” Malaa, who hails from Kathmandu, the capital city near the epicenter of the earthquake that killed more than 4,000 people. “I want to go back and personally set up landlines. They need me more there than here.”

Under these circumstances, social media can take on a special significance.

“I couldn't reach an aunt that lives in Kathmandu but I heard [about her] on Facebook,” said Ngawang Sherpa, who is collecting medical supplies and funds through her group, the Nepalese American Nursing Association.

Pasang, a waiter at Thakali Kitchen from Kathmandu, also said Facebook helped him stay in touch.

“There are some people [outside Nepal] who hear things and they put them Facebook,” said Pasang, a 24 year old waiter at Thakali Kitchen. 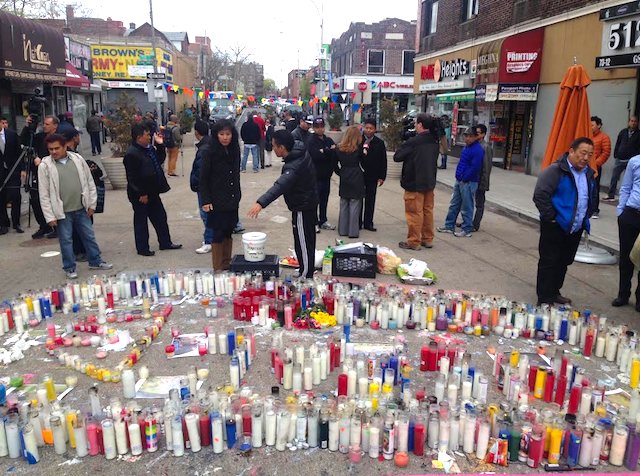 Priti Maharjan, a young woman who works at Queens Diamond & Jewelry, which claims to be the only Nepali Jewelry store in Jackson Heights, says her relatives still had power from the generators used to run their family business in Patan, where ancient temples have been pulverized.

“Our house and property is a little cracked and damaged, but besides that everyone is fine,” she said. “We are praying for people everyday, and yesterday we lit candles [here]. And we're helping to collect funds to send to organizations you can trust, like Red Cross and UNCEF.”

While the community in New York is united in support for its homeland, Nepal is far from a homogenous country, and relief efforts across the Nepali-American community reflect some of the divisions induced by the nation's ancient but still influential caste system, explains Amit Shah, president of the Nepalese American Foundation.

“Most of the [Nepali] ethnicities have their small cluster organizations [in the US] that work for their community welfare here and back to Nepal,” Shah explained.

“If a couple of organizations came together, and decided to do the candlelight prayer, we just want to participate. We just want to be part of it,” he said, adding that the local community would continue holding fundraisers for about a month and then send funds through a mainstream international agency.

It may also take that long, if not longer, to assess the total damage. Rural villages near the epicenter that were buried in rubble are impossible to reach; the prime minister recently announced that the death toll may reach 10,000.

Pasang, the waiter who has still not heard from his parents in Kathmandu, told Gothamist that it did no good to curse the forces that caused the disaster.

“Everybody is worried, but we cannot fight with earthquakes and national disasters,” he said, adding that the most important thing was to “help people to get relief.”

Aaron Miguel Cantú is an investigative journalist and researcher in Brooklyn.

#jackson heights
#nepal earthquake
#Nepali
#queens
Do you know the scoop? Comment below or Send us a Tip
A new Gothamist is coming! We’ve moved comments over to our beta site. Click here to join the conversation and get a preview of our new website.