NYC's Hottest Subway Sauna Is [All Of Them]

Hello and good morning to everyone but The Weather, which conjured up this city-sized wood kiln and—following this steamy rain respite—plans to shove all 8.6 million of us miserable clay people inside to slow-bake for days. Welcome to the first heat wave of 2019: The experts expect we will sizzle in our skillet beds all weekend long, with the heat index potentially reaching 108 degrees on Saturday.

We live on a literal heat island—thanks to our preferred design materials, in combination with the city's wild overabundance of humans and dearth of vegetation—that traps heavy, bathwater air over our city. That's why it's sometimes 2 to 22 degrees warmer than the surrounding suburbs, depending on time of day.

You will feel this acutely if you descend into the underground subway stations, otherwise known as hell's growling belly. Occasionally you catch a break and your stop actually feels like an oasis compared to the inferno raging outside: nothing like the wind off an oncoming train in the summer, you know? But often, the environment inside the subway system becomes downright sauna-like: Cloying humidity sucks the sweat out of your skin and sends it pelting down your back in salty streams. True, the typical environment inside a sauna sits somewhere in the 150- to 175-degree ballpark, but when you find yourself sandwiched between muggy pits and damp backs on an overcrowded platform, even 110 degrees might feel like a wild underestimate to you.

To help you get a firm grasp on the situation, as firm a grasp as a person drenched in perspiration can get on anything, Gothamist went to some of Manhattan's subway stations on Wednesday, just to see how things are developing. Here are the temps we tracked mid-day, and it's only going to get hotter from here: 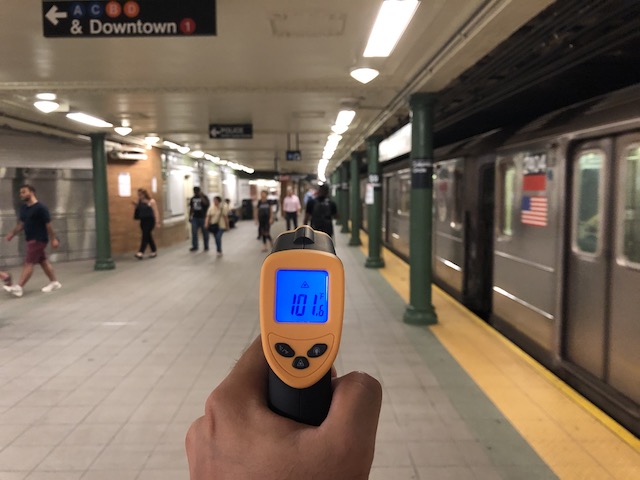 In the bowels of Columbus Circle. (Adwait Patil/Gothamist)

Broadway-Lafayette
Outside the station: 94 degrees
On the platform: 95.9 degrees

34th Street-Herald Square
In the station: 96.9 degrees
On the platform: 95.6 degrees 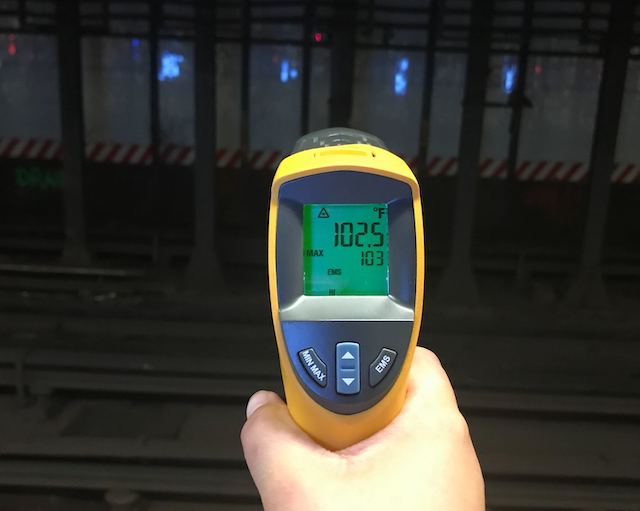 What the people are saying: "It feels like a volcano. People faint. I've seen people faint everywhere. Agitated. Uncomfortable. It just doesn't feel right," Eric Melendez, 38, told us while waiting on the 4/5/6 platform.

What the people are saying: "This feels not normal. It feels like generated heat. Like they're forcing us to feel this heat. I feel like I'm in the Sahara desert right now and I'm in New York City." — Xavier Saunders, 24, waiting on the 4/5/6 platform.

What the people are saying: "The heat is terrible! It's also dangerous. I always see homeless people trying to seek refuge down here, and I worry about their health." — Meg Wise-Lawrence, 57, waiting on the R platform.

"It's dirty. The smell and the heat make it a lot worse. ...If we're waiting for a while, it gets us angry and impatient and we regret actually taking the train." Crystal Lozada, 15, waiting on the 4/5/6 platform. 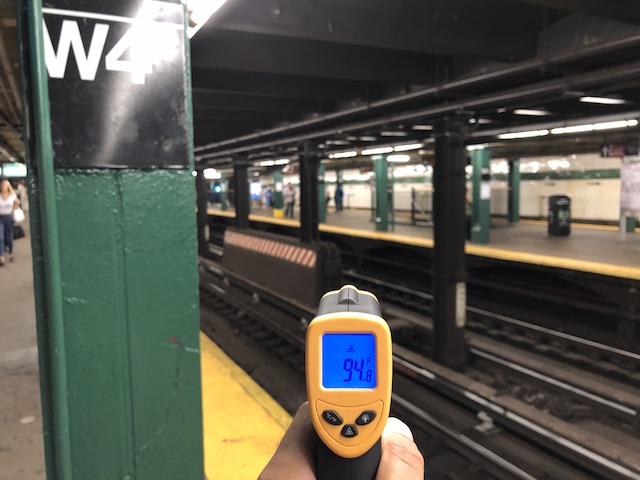 West 4th Street
Outside the station: 93.5 degrees
On the platform: 94.8 degrees

Spring Street (C/E lines)
Outside the station: 94 degrees
On the platform: 93.1 degrees 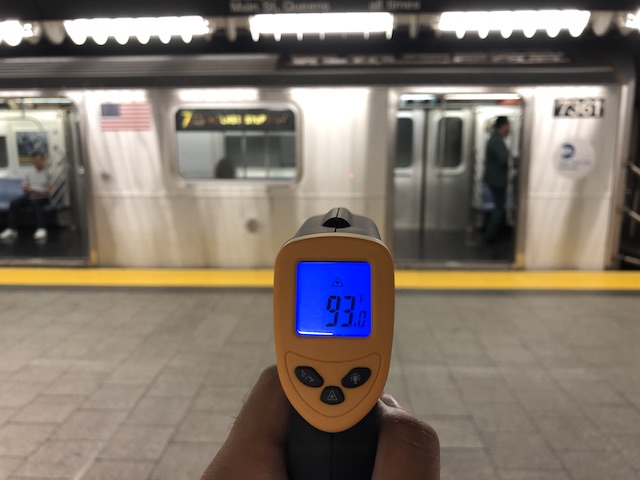 On the 7 platform at Hudson Yards. (Adwait Patil/Gothamist)

The bottom line
Locate a cold bath and plant for the next few days, it's horrible outside.