Grover Cleveland was in the White House and we could pick up laudanum without a prescription to cure what ailed us, but cyclists were still running afoul of pedestrians and motorists. New York City's first automobile accident occurred on May 30, 1896, when Henry Wells of Springfield, Massachusetts, struck cyclist Ebeling Thomas on the "Western Boulevard" (better known to us as Broadway).

The Times reports that Wells was operating a "horseless wagon" in a "horseless wagon race" bound north, and that Thomas was riding south when, according to witnesses, "the motorman of the horseless wagon seemed to lose control of the wagon, which ran zig-zag and thus confused the bicyclist." Thomas suffered a fractured leg, and Wells was "locked up" in the police station at West 125th Street. The article is refreshingly devoid of the phrase "no criminality suspected."

"Five reckless riders" on Broadway, two of whom were riding on a tandem bike, were also arrested (arrested!) for "riding faster than the law permits." The report notes that they were "warned by Patrolman Gilles of the bicycle corps, but they paid no attention." Two more cyclists were nabbed for speeding downtown, one at 14th Street and Second Avenue. Magistrate Crane, in addition to fining the men $3, "gave the scorchers a severe lecture."

"Some of you people think that no one has a right in the street but yourselves. I know I have had to run for my life to get out of the way of reckless bicycle riders."

The first fatal car accident in New York (and possibly in the country—the first reported auto accident in the US was in Ohio in 1891) occurred on September 13, 1899, when H.H. Bliss, a "real estate dealer" was hit by a car as he exited a trolly on West 74th Street and Central Park West, known as the "Dangerous Stretch." According to the Times' report, the car veered after a truck blocked its path, "and the two wheels of the cab passed over [Bliss'] head and body. His skull and chest were crushed." The driver was placed under arrest shortly after the incident. Read the entire source articles below. 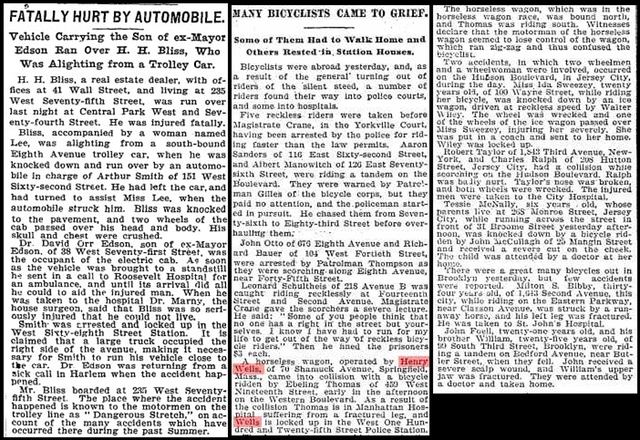 #19th century
#bike lanes
#car accidents
#cycling
Do you know the scoop? Comment below or Send us a Tip