A new series of bills would give police officers the discretion to steer certain low-level broken windows offenses like drinking in public, littering, and public urination to civil court, rather than criminal court. And while some advocates have praised the proposals as an effective way to prevent New Yorkers—a disproportionate number of them young men of color—from accumulating criminal records for quality of life offenses, others object that it still empowers the NYPD to stop and ID citizens for those same offenses.

The NYPD discretion proposed under the group of eight bills, known collectively as the Criminal Justice Reform Act, is already used for offenses like riding a bike on the sidewalk or turnstile jumping. However, the new laws would also encompass littering, public urination, public consumption of alcohol, breaking certain park rules, and making excessive noise. As an NYPD spokesman put it last week, "Where appropriate, the civil option is probably going to be the go-to option." However, "You have to have the criminal option available."

Under current law, anyone issued with a criminal summons for, say, urinating in a public park, is given a date to appear in court. Miss a court date, and a warrant is issued. According to the National Civil Liberties Union, 40% of summonses result in an arrest warrant being issued for a failure to appear in court. Warrants, in turn, can hinder eligibility for a job, child custody, or financial aid.

According to the City, there are 1.5 million open warrants in NYC dating back to 1980. Of those, 1.1 million belong to unique individuals. "This has... both individual consequences for those issued warrants and for the criminal justice system’s use of resources," said Mayor's Office of Criminal Justice Director Elizabeth Glazer at City Hall on Monday.

The bills would also require the NYPD to document and make public the number of summonses to appear in civil court versus criminal court, as well as the age, race, and gender of each person summonsed.

In an op-ed for the Gotham Gazette, Alex Vitale compared the proposed civil alternative to traffic court. Rather than a warrant, the offender could be issued a fine, or sentenced to community service. First offense fines would range from $25 to $250.

Fines, Vitale points out, are financially burdensome—particularly in the low-income neighborhoods that tend to be hit with the brunt of the NYPD's quality of life enforcement. The new law as written states that community service would be an alternative option, but only for "certain" offenses.

Over the summer, we spoke to New Yorkers at a warrant-clearing event in Cobble Hill hosted by the Brooklyn DA. Pat Brooks, a Sheepshead Bay resident, described the burden of the fines already associated with some minor offenses. "You get little summonses, and you can't afford to pay half of them, and they keep going up. And by the time you pay, you have to pay like, $500," she said. 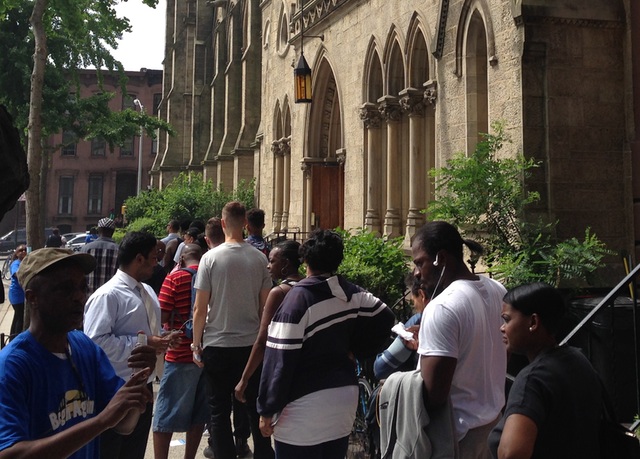 Chief Judge of the State of New York Jonathan Lippman has also endorsed converting certain low-level summonses to civil offenses. However, reforms up for discussion last spring would have barred NYPD officers from IDing New Yorkers, since citizens don't have to provide ID for civil violations. Police Commissioner Bratton balked.

The current legislation, which now has Bratton's support, gives officers the discretion to ID New Yorkers for perceived quality of life offenses, and run background checks.

At City Hall on Monday, bill sponsor Melissa Mark-Viverito stressed that her legislation would not alter the way the NYPD perceives quality of life offenses. "What the act does not do is legalize anything," she said. "It does not remove or reduce the NYPD's power to enforce these low level offenses."

Which is exactly what has some police reform activists troubled. "These proposals, in effect, cement and entrench... the police as our society's harsh arbiter of appropriate behavior," said Robert Gangi of the Police Reform Organizing Project in a statement. He added that the new laws would do nothing to challenge the so-called quota system, under which police chiefs illegally hold their officers to a certain standard of monthly arrests and summonses.

This, advocates say, can lead to unjustifiable arrests targeting minority communities. A recent report [PDF] from John Jay College showed that 65% of all summonses issued by the NYPD from 2003 through 2013 were either dismissed (41%) or found to be defective or legally insufficient (24%). According to a Daily News report in 2014, about 81% of the 7.3 million people issued violations between 2001 and 2013 were black or Hispanic.

Monifa Bandele, a Spokeswoman for Communities United for Police Reform, stated that while summons reform is a "positive first step," New Yorkers also deserve the passage of the Right To Know Act—legislation that would require NYPD officers to identify themselves to civilians and provide specific reasoning for their activities.

"It is also essential that the Council simultaneously advance [reforms] to end the policing abuses that make some New Yorkers and communities the disproportionate target of low-level enforcement in the first place," she said.

In his State of the NYPD address last week, Commissioner Bratton continued to argue that broken windows policing is central to his mission.

"The basic mission for which the police exist is to prevent, and I emphasize prevent, crime which this department for 25 years has been doing year in and year out," Bratton said. "As long as I'm police commissioner we will stay focused on disorder, quality of life, broken windows."

Because it's really expensive to live here and there's limited space for tossin' the disc, here are your end-of-day links: city employees charged with pandemic loan fraud, Dave Matthews is the Gen-X Democratic voter whisperer, metal credit cards are cool (?), and more.

By
Nancy Solomon
'Police are not the answer': Civil liberty advocates on NYC's plan to involuntarily take mentally ill people to hospitals
By
Verónica Del Valle
and
Michael Hill
Early Addition: Pet sitting in a rich person's home is one way to have a cheap but fancy vacation
By
James Ramsay
NYC must pay as much as $300 million after people posted bail and weren't released
By
Matt Katz
Get the news New Yorkers need in your inbox