App-based drivers in 10 U.S. cities as well as London and Australia held protests (or boycotts?) as Uber prepares a nearly $100 billion initial public offering. In New York many drivers turned off their apps for two hours during the morning rush on Wednesday.

"When you're a passenger, for example you’re paying $20, but me being a driver I don't even get $10 from that ride,” Uber driver Nabila Nusrat, 30, said Wednesday. She describes Uber as the big fish “making all the money,” and “I'm at the bottom of the chain so I'm getting pressed," she said.

Uber says about 500 of their drivers turned off the app. Lyft wouldn’t comment on how many of their drivers did the same, although many drivers use both apps. There are around 120,000 people who drive for-hire vehicles in New York City.

Nothing like a traffic clogging procession to get people’s attention. Uber/Lyft drivers arrive at company’s offices in LIC. pic.twitter.com/WWoYTEXJ3q

The strike came one week after Lyft lost a challenge to the city’s minimum wage rule for app-based drivers. New York is the only city in the U.S. that offers a minimum wage to drivers of for-hire vehicles, as well a cap to limit growth.

Many drivers admitted conditions were better in New York than other cities and they want to protest in solidarity with drivers around the world.

Outside of Uber and Lyft offices in Long Island City, dozens of drivers organized by the group known as the Independent Drivers Guild (IDG), which receives some funding from the app-based companies, organized a rally. Many were Chinese drivers who learned about the protest on an IDG WeChat group.

Uber said as part of its IPO, it would offer 1.1 million drivers an “appreciation reward” based on number of trips they’ve taken, ranging from $100 to $10,000 dollars out of a pool of $300 million. Uber has three million drivers worldwide, and 700,000 in the U.S. In its filings, Uber revealed that the bulk of its rides take place in five cities.

In a statement, Lyft said its driver’s hourly earnings have increased 7 percent for the past two years. “Over 75 percent drive less than 10 hours a week to supplement existing jobs. On average, Lyft drivers earn over $20 per hour,” a Lyft spokesperson wrote. 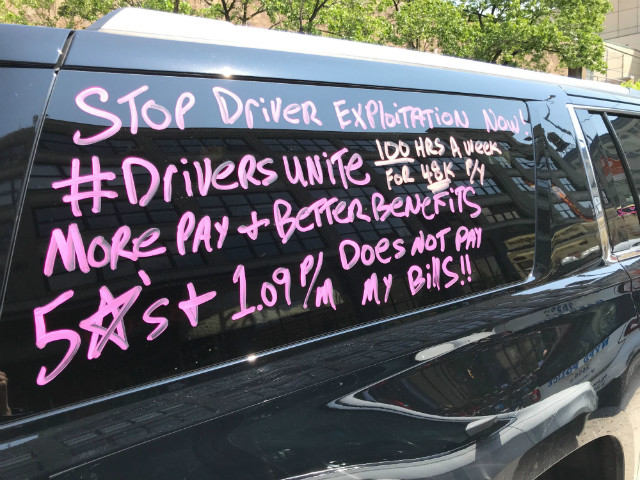 Uber driver and Brooklyn resident Victor Gammec, 52, was at the IDG rally and said transparency, fair treatment of drivers, and the right to unionize are his top concerns. He’s worried about drivers being deactivated unfairly without any process. He also wants Uber to add a destination filter back to it app, because, for example if he’s sent to Westchester at the end of a shift, he usually has no passenger for the ride home. “For me that’s a wasted hour I don’t get back,” he said.

“Drivers should be treated with dignity and respect the same kind of rights that most other workers can enjoy in other fields, the best way to achieve that is organizing and becoming part of a union,” Gammec said.

#for hire vehicles
#lyft
#uber
#we the commuters
#original
Do you know the scoop? Comment below or Send us a Tip
A new Gothamist is coming! We’ve moved comments over to our beta site. Click here to join the conversation and get a preview of our new website.