As the race to Gracie Mansion heats up, two important and related issues are increasingly taking center stage: income disparity and housing. Mayoral candidates keep talking about helping the middle class (well, what is left of it) and building more affordable housing—but what does that mean? In 2002, Mayor Bloomberg announced his New Housing Marketplace Plan (NHMP), and recently he said they are on track to create or preserve "more than 130,700 units of affordable housing across the five boroughs." Shouldn't that be enough? Not if those affordable units aren't, you know, affordable.

Yesterday the Association for Neighborhood and Housing Development (ANHD) released a depressing report [PDF] which paints a distressing picture of just what "affordable" means in Bloomberg's New York. See, because "units produced" is the only measurement of success for NHMP's program, the city

How much so? To the point that in half of the city's community districts the majority of units built are just too expensive for a household earning the local median income for the neighborhood. Which means that those already in a given community can't actually take advantage of that housing. For example? In the city's poorest borough, the Bronx:

And this isn't just a problem in the Bronx. Look at this map of the city showing just how unaffordable much of these units are to those who live near them: 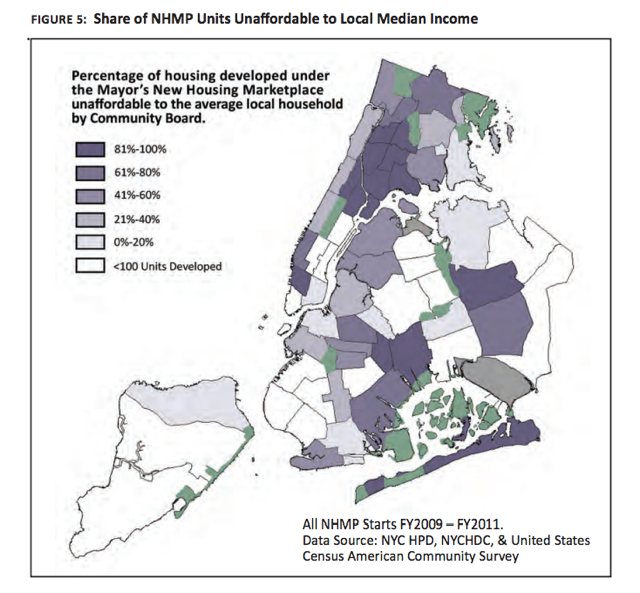 There are a number of reasons for the disparity—including the fact that the Area Median Income (AMI) in the city is skewed dramatically by income data from neighboring suburbs being mixed in—but the results are not great. Just look at these charts showing first a breakdown of the city's population by income as a percentage of the AMI followed by a breakdown of the city's new housing as it breaks down for the same groups. Not pretty: 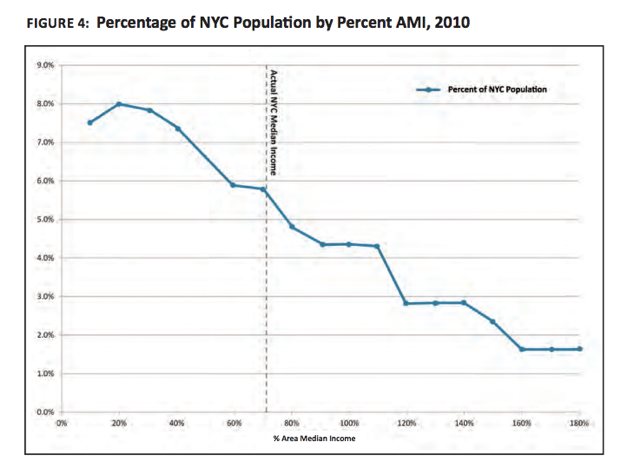 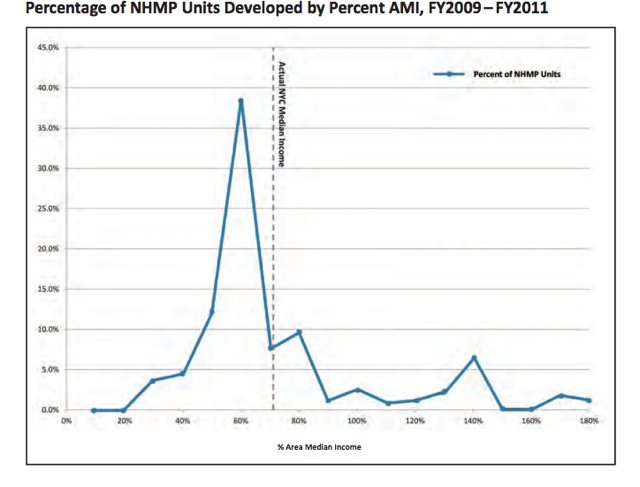 And the problems with the city's "affordable" housing aren't just how unaffordable much of it is to the people who need it most—it also may not be long for this world. Many of these units the city has helped create with NHMP are set to expire anywhere from 30-50 years after construction and older units built under mayors Koch, Dinkins and Giuliani are starting to age out. According to the report, "Starting in 2017, NYC will begin losing an average of more than 11,000 affordable units a year." By 2037 the City may lose as many units as were built by NHMP!

So what to do? A lot will really depend on how the next mayor sees the city's future. ANHD makes a number of proposals (which you can read below) but, as Michelle de la Uz, Executive Director of Fifth Avenue Committee, notes: "New York City Mayors have long understood the critical role that safe, decent and truly affordable housing plays in ensuring that New York City remains a global capital that attracts people from around the world to live in vibrant neighborhoods that offer opportunity to all. The challenges for the next Mayor are clear—we must re-tool, re-double and re-align the city’s efforts to support permanent and real affordable housing, or risk becoming a city that only the very wealthy can afford."

#anhd
#Election 2013
#housing
#low income
#Middle Class
#middleincome
#nhmp
Do you know the scoop? Comment below or Send us a Tip