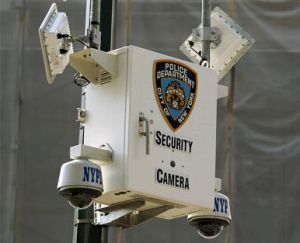 The NYCLU has filed a new lawsuit against the NYPD. This time around, the NYCLU wants information about the Lower Manhattan Security Initiative, which involves hundreds (up to thousands) of cameras filming activity downtown.

The NYCLU is concerned because, per the group's associate legal director Christopher Dunn, "the police tracking millions of law-abiding New Yorkers...has profound privacy implications." The NYCLU wants information about the scope of information to be collected, how the police will use the information, who the information will be shared with, what privacy protections will be included, and many more things.

Referring to the reports of Operation Sentinel (aka Operation Photograph Every Single Car in NYC), executive director Donna Lieberman said, "The public and our elected officials can’t keep reading about these programs in the paper." The NYPD's response? Spokesman Paul Browne told the NY Times, "We have already provided the N.Y.C.L.U. with information short of a road map for terrorists to use in another attack on the financial district."