A report released yesterday by the NYCLU uses the NYPD's own numbers on stop-and-frisk to reveal the depth of racial disparities and ineffectiveness of the policy. The report constitutes the most comprehensive analysis of NYPD stop-and-frisk activity ever conducted. "In the most basic sense, there are no surprises here," said NYCLU Executive Director Donna Lieberman. "We see the same targeting of totally innocent people by the police that we have seen since the beginning of the Bloomberg administration, but this analysis paints the most vivid and damning picture yet of how the police department routinely abuses the stop-and-frisk tactic."

Using the NYPD's full electronic database on 2011 stop-and-frisk activity—which was obtained by the NYCLU after a successful lawsuit filed in 2007—Data and Policy Analyst Sara LaPlante closely examined different aspects of stops across the city including the use of force, race, weapon recovery, location, and the treatment of hundreds of thousands of innocent people stopped last year.

Whenever someone is stopped by police in New York City, the officer is required to fill out a form that records the details of that stop. That information is then manually entered into an electronic database. The activity officers cite as the reason to initiate a stop was a major focus of the report. In 2011, the most frequent reason given was "furtive movement" at 51.3 percent, yet the police continue to justify the disproportionate number of black people stopped because they say blacks are disproportionately involved in violent crime. However, only 10.5 percent of stops cited "violent criminal activity" as the reason for the stop.

Despite mounting evidence that the policy is ineffective, the NYPD attempts to justify stop-and-frisk on the grounds that it recovers a large number of guns. In 2003, police recovered 604 guns as a result of 160,851 stops. In 2011, the Department conducted an additional 524,873 stops (for a total of 685,724), yet only 176 additional guns were recovered. Of the 685,724 stops in 2011, only 1.9 percent resulted in the recovery of a weapon. And while blacks and Latinos were more likely to be stopped, whites were almost twice as likely to be found carrying a weapon. Even in neighborhoods without a majority black or Latino population, black and Latino young men were still stopped at a rate disproportionate to their white counterparts. 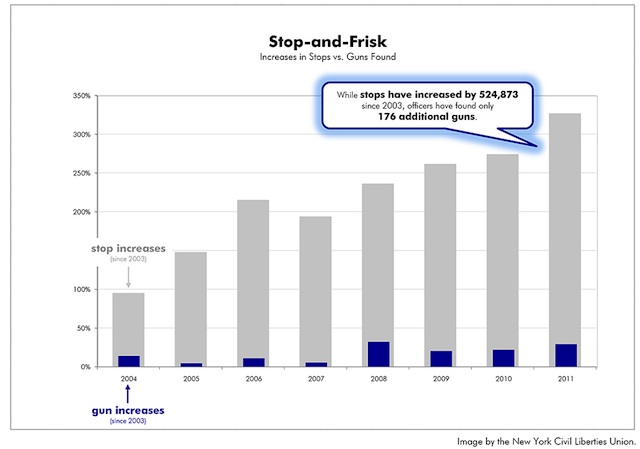 The single most common form of force was "hands on suspect" which accounted for about 70 percent of the use of force within the department. "I want to emphasize, however, that the notion that 'hands on suspect' is a de minimus form of force is a notion that should not be accepted," said NYCLU Associate Legal Director Christopher Dunn, "When a police officer puts his of her hands on someone who gets stopped that qualitatively changes the experience."

Other noteworthy findings in the NYCLU's report:

Donna Lieberman blasted Mayor Michael Bloomberg and Police Commissioner Ray Kelly for the 600 percent increase in stop-and-frisks since the mayor's first year in office. "Under this administration, we have come to see a two-tiered system of policing in New York," she said, "There's the kinder, gentler policing that we see on the Upper East Side or in Park Slope and the up-against-the-wall policing we see in Brownsville and Harlem." While the NYCLU maintains that a 2007 report commissioned by the NYPD and conducted by Rand Corporation glossed over racial disparities, the report did conclude that a city the size of New York should be conducting roughly 250,000-330,000 stops annually. Lieberman, reluctant to cite the report, noted that the NYCLU would not suggest what the "right number" of stops would be. "That leads us into a conversation about quotas," she said. "Quotas are antithetical to the constitutional standard for stop-and-frisk." 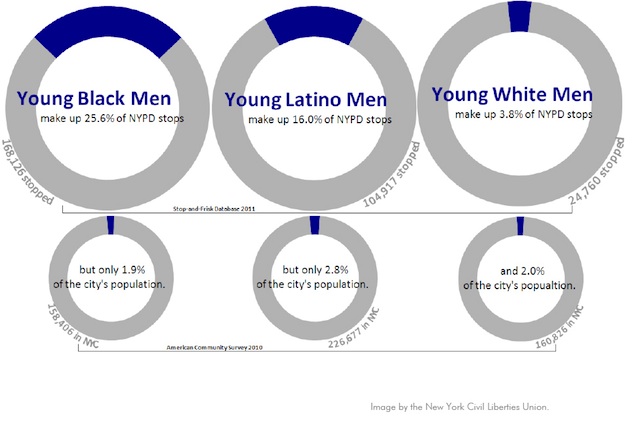 Raw data cannot provide insight into the crushing emotional and psychological effects put on black and Latino New Yorkers, yet Lieberman suggested the abuse of stop-and-frisk has whole generations of boys and girls growing up afraid of the very people who are supposed to be keeping them safe. "In New York City's tale of two cities," she continued, "Moms have to train their teenagers not just to behave, but if they're parents of color they also have to try to teach them what to do if the police stop them for doing nothing wrong on the way home from school."

#crime
#nyclu
#nypd
#Ray Kelly
#stop and frisk
Do you know the scoop? Comment below or Send us a Tip