Lawyers for the city are still picking out a seemingly endless spray of legal shrapnel that exploded out from the NYPD's mass arrest of protesters during the Republican National Convention in 2004. Over 1,700 people were rounded up in advance of George W. Bush's coronation ceremony at Madison Square Garden, many of them detained for well over 24 hours and housed at a filthy makeshift detention center on Pier 57 that formerly served as a petroleum depot. Today attorneys for the city are back in court to defend allegations that the NYPD illegally rounded up hundreds of protesters in unconstitutional mass arrests at two locations in Manhattan.

Some people who were arrested were not even involved in the protests. The lead plaintiff in one of the lawsuits being heard today, Hacer Dinler, is a dance instructor from Brooklyn who was on her way to work when she suddenly found herself penned in by police on the sidewalk on 16th Street by Union Square. She says police would not let her leave, and she was swept up with the protesters. "After about two hours in confinement, during which time the NYPD ignored her repeated calls for help, Dinler fainted and experienced convulsions," NYCLU lawyers claim. "She was eventually transported by ambulance to St. Vincent's Hospital, where she underwent testing and treatment until the following morning." 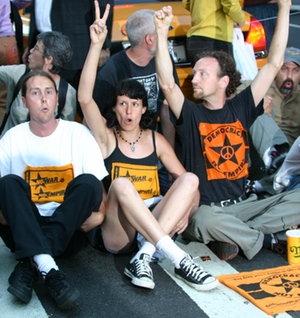 The other case being heard today involves mass arrests on Fulton Street near the World Trade Center. The lead plaintiff in that one, Michael Schiller, was working on an HBO documentary about Andre 3000 and was following the Outkast member around as he attended the convention. According to the NYCLU, "Schiller was lawfully on a public sidewalk near the front of the march attempting to film the protesters moving toward him when he was surrounded by police netting and placed under arrest. Despite his pleas to the officers that he was a member of the press working on a documentary, he was not released. Rather, he was falsely arrested, held for over thirteen hours at Pier 57, unlawfully fingerprinted, and eventually released after spending 35 hours in police custody, having been charged with nothing more than three minor offenses."

Most of the people arrested were charged with Obstruction of Government Administration, Disorderly Conduct (for failing to obey a lawful order from police officers), and Parading Without a Permit. The vast majority of these charges were dismissed outright, but the civil lawsuits against the city are still winding their way through the courts. "At Fulton Street they were all on the sidewalk, and the march leaders were negotiating with police," says NYCLU Senior Staff Attorney Taylor Pendergrass. "We believe they had oral permission for the march, and anyway no permit is required for a sidewalk march. And on East 16th Street, hundreds of people were arrested who were on the block on that summer night and were not part of the protest—they were just going about their business on the sidewalk." 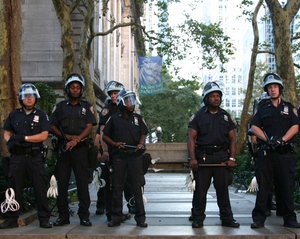 The two lawsuits being argued today seek unspecified monetary damages for nearly fifty plaintiffs. Pendergass says, "The city has conceded that there is no information the NYPD has that people were doing anything illegal at these locations. Today's hearing will turn on whether the judge accepts the city's proposition that there is something called 'group probable cause.' The city's argument is that the police had reason to believe the entire group was involved in some illegal conduct of some kind and were arrested en masse. And when you look at the videos it's unambiguously clear that if there was any unlawful activity it was just some people in a big crowd of others who were completely lawful and not breaking any laws of any kind.

"In our view, the 2 officers who ordered these mass arrest decisions made a mistake that was avoidable and violated the constitutional rights of hundreds of people. And the city has been saying for years that those decisions were totally defensible, and I think the court's decision in these cases is very important, not only for the plaintiffs in these cases, but also to make clear that people can participate in protests or simply walk down a city street without being subject to an unjustifiable mass arrest."

The city has spent untold thousands of taxpayer dollars defending these lawsuits, and more paying settlements. But you just can't put a price on a smooth, orderly party honoring President George W. Bush.

#nyclu
#republican national convention
#RNC
Do you know the scoop? Comment below or Send us a Tip