On the evening of February 13th, Mary McGee stepped up to a microphone at Borough of Manhattan Community College. Four New York City Housing Authority board members sat silently before her, along a folding table draped in blue bunting. McGee lives in the Fulton Houses in Chelsea, and had come to that night’s sparsely attended public comment meeting to criticize what she sees as a lack of transparency around a pressing issue: NYCHA’s plans to turn over management of a third of its housing stock to private developers.

“Decisions are being made without residents being informed,” McGee said. “I believe that if this information was given to the residents and explained to them—exactly what this program is really about—this room would have been packed.”

Mayor Bill de Blasio and his staff first announced plans to partly privatize NYCHA last November, partnering with developers to repair and renovate 62,000 public housing units. Private capital would cover an estimated $13 billion in repairs across these buildings—more than half of the mayor’s ambitious $24 billion plan to bring NYCHA into a state of good repair in ten years.

But since then, the city has moved to amend its plan, requesting additional federal vouchers via a provision of the housing act seldom used for renovations. NYCHA has promised residents that their homes will be fixed and remain affordable in perpetuity. Still, advocates and housing experts are skeptical of an amorphous plan highly contingent on long-term federal and private sector buy-in.

“We always caution against being alarmist, but what we really want is real transparency to ensure that people who live in these homes are not at risk of losing them,” Legal Aid Society attorney Lucy Newman tells Gothamist. “It is really tricky stuff, and I think we could all benefit from the utmost transparency. It shouldn’t be that we have to be working out these questions ourselves.” 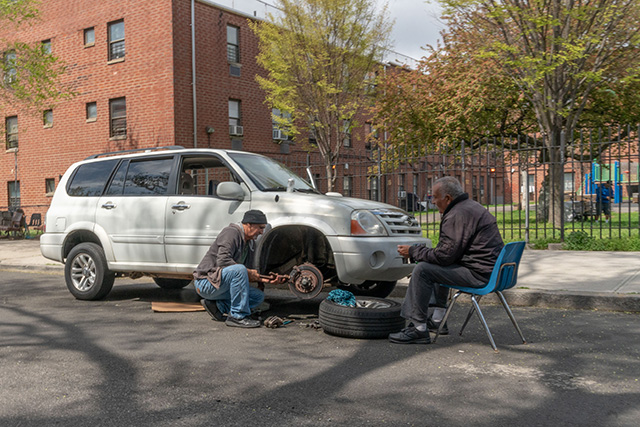 By last fall, City Hall had settled on private partnerships as necessary to quickly address NYCHA's staggering debt and repair needs. Federal funding for NYCHA has decreased steadily for decades, and five-year cost estimates to address immediate needs—rampant mold and lead paint, broken heating systems and elevators—range from $32 billion to north of $45 billion.

The de Blasio administration indicated that it would take advantage of the Obama-era Rental Assistance Demonstration (RAD) program, which turns renovation and management responsibilities over to private developers. This would allow NYCHA to tap into federal rent-assistance vouchers, which would in turn allow private developers to use the added cash flow to finance loans to do repairs.

“We know from experience that RAD is a reliable, scalable strategy that resolves deferred maintenance while keeping rents affordable,” then-Deputy Mayor for Housing and Economic Development Alicia Glen stated in November.

But since then, the city’s plans have changed. 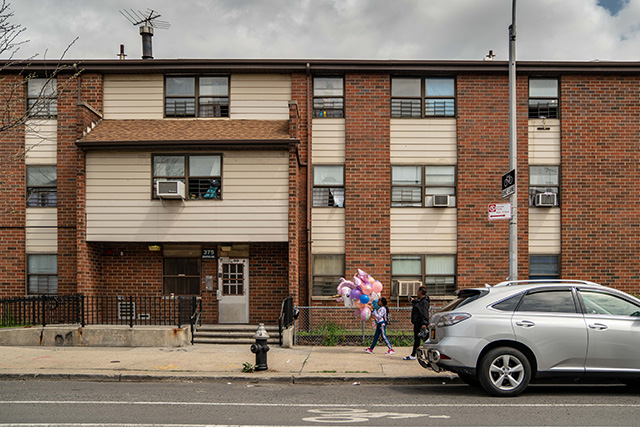 On March 21st, NYCHA sent a “Significant Amendment” to HUD in which it asked to expand the use of Section 18 of the U.S. Housing Act of 1937. (Residents were encouraged to comment on this request at NYCHA’s sparsely attended February meeting.)

RAD and Section 18 function differently. RAD converts NYCHA's existing federal HUD funding—for both capital repairs (such as roofs and boilers) and everyday maintenance—into Project Based Vouchers that can be used for privately run projects. Section 18, meanwhile, unlocks more lucrative Tenant Protection Vouchers: Where RAD vouchers only pay the difference between residents’ rent (set at 30 percent of their adjusted gross income) and $1,220 a month, TPVs can cover the gap all the way up to $2,014 a month.

NYCHA’s amendment requests broad leeway to use Section 18 to convert “some or all” units approved or under consideration for RAD. These include three bundles—two in Brooklyn and one in Manhattan—with 2,398 apartments between them, expected to close in 2019. The city has requested permission to possibly convert another 21 scatter sites in Manhattan and the Bronx, with more than 2,500 units between them, at an unspecified future date; NYCHA also made a more precise request for a fourth bundle in Bushwick that would include Hope Gardens, Palmetto Gardens, and Bushwick II houses: “up to 25 percent” TPV conversion.

There is an obvious short-term benefit of this voucher blending. The more money the feds provide, the more private financing developers can access for repairs and renovations. A NYCHA spokesperson confirmed that NYCHA believes RAD subsidies are too low and that only blending with Section 18 will make these deals viable.

“NYCHA’s motivation is they want to have a stronger rent stream that makes the deal feasible and optimally of interest to the developers,” says Victor Bach of the Community Service Society. “Frankly a lot of deals are difficult to make because there’s a gap in the financing. So if you have higher rent streams, it’s easier to finance the deal.”

On its own, Section 18 has primarily been used to demolish or dispose of public housing—not for renovations. For example, the Alexander County Housing Authority in Illinois recently awarded a demolition contract for two of its complexes.

Since last spring, though, HUD has been encouraging housing authorities to use Section 18 to unlock valuable vouchers for its RAD projects, as San Francisco—another expensive city—did in the early aughts. (The Fulton Houses in lower Manhattan, which Politico’s Sally Goldenberg reports are being considered for partial demolition and reconstruction as mixed-income housing, are not included in NYCHA’s amendment.)

A July 2018 HUD notice guarantees that these blended developments will include the same tenant protections that RAD tenants have: succession rights, lease renewals, a grievance procedure, and funding to organize a tenant association.

But there’s the question of whether all of NYCHA’s TPV requests will be met. The levels of Section 18 the authority is requesting require special approval because they exceed a 25 percent cap that HUD set last year. “Individual properties converting via RAD are generally subject to a ‘75/25 percent’ limitation,” HUD spokeswoman Olga Alvarez tells Gothamist, though “each RAD conversion is unique and the percentage can vary.”

Legal Aid’s Newman notes that NYCHA recently reached a settlement with the federal government to appoint a monitor and complete much-needed repairs. “Does [privatization] free up more of NYCHA's capacity to focus on the remaining two thirds of public housing, and make them the best that they can make them?” she asks. “It's not a done deal.” (The mayor’s office says that the federal agreement and its public-private partnerships are completely separate.)

Finally, federal law states that RAD contracts between private developers and public housing authorities—and all of the tenant protections therein—automatically renew every 20 years. There are no equivalent rules under Section 18.

“There is no assurance that…Section 18 rent assistance contracts will be sustained after they end in 20 years,” a group of concerned advocates, including Newman and Bach, wrote in comments submitted to NYCHA in February.

If TPVs fall short down the road, advocates warn, it’s unclear how New York City will make up the difference and keep NYCHA in good repair while maintaining affordability for low-income families. A City Hall spokesperson says that the administration will work closely with HUD and Congress to ensure enough TPVs are appropriated. But de Blasio leaves office in 2022. When Section 18 contracts expire, the city will have different mayoral administration with unknowable priorities.

“Is the city prepared to back up the vouchers on its own?” wonders Bach. “We don’t know the answer.” 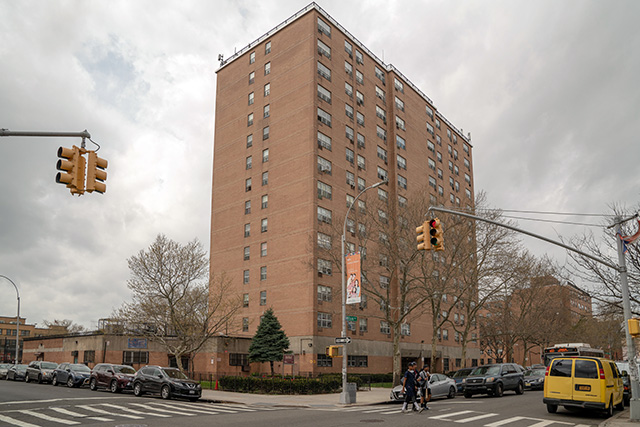 Manhattan Borough President Gale Brewer has been critical of the move to expand the application of Section 18.

“NYCHA must do a better job communicating with its residents,” Brewer testified at the February 13 meeting in Lower Manhattan. “Those who are going to be impacted… particularly if it’s under Section 18 with less protection—should not have to find out what’s going on from elected officials or advocates."

A NYCHA spokesperson tells Gothamist that the authority will speak individually with concerned tenants and host meetings about Section 18.

Noting all of the skepticism around NYCHA—tens of billions of dollars in outstanding repair needs, shifting funding plans and shifting leadership—Bach likes to point to “more positive prospects down the road.” For example, a new, longshot infrastructure proposal from House Democrats includes $70 billion for public housing. Up to $20 billion of that could go to NYCHA, Representative Hakeem Jeffries told City & State recently. “Now that Dems are in control of the House, it's more likely to take shape,” Bach predicts.

Alvarez, of HUD, tells Gothamist that her office “is aware of NYCHA’s expanded use of Section 18 and is working closely with NYCHA to make sure that Section 18 is being utilized to help NYCHA with their re-development needs.” She adds, “HUD is aware of NYCHA’s desires to revitalize units and bring them up to more livable standards without displacing residents.”

Cynthia Tibbs is a tenant leader at a small cluster of NYCHA-owned brownstones on the Upper West Side. At a recent closed-to-press meeting, NYCHA staff explained to Tibbs and her neighbors that their homes were not being considered for private conversion at this time, despite notices to the contrary.

“There’s not enough clarity in the entire RAD proposal,” Tibbs tells Gothamist. “So how are we exactly being protected other than the promise that the rents won’t go up? And we don’t trust that because the president can change his mind any day. There’s too many loopholes that we’re going to wind up falling through the cracks on.”

Because it's not a crime to snitch on Big Cashmere, here are your end-of-day links: Buying beer near Grand Central Madison, a West Village newspaper feud, three people in a hole on Long Island and more.