In the face of at least $35 million in federal funding cuts for 2017—what Bronx Council Member Ritchie Torres described Monday as a "financial death spiral"—New York City Housing Authority Chair Shola Olatoye insisted that NYCHA now has no choice but to fully embrace NextGeneration Neighborhoods: a controversial plan launched in 2015 that entails selling off chunks of NYCHA land to private developers in order to put a dent in the authority's multi-billion deficits.

"With so much uncertainty from Washington, the debate on whether or not to build on public housing land as a revenue source should be over," Olatoye testified during a NYCHA budget hearing.

The privatization approach has been met with pushback from housing advocates and NYCHA residents at some of the first sites slotted for development: parking lots at Wyckoff Gardens in Boerum Hill and a playground at Holmes Towers on the Upper East Side. Residents have predicted that an influx of wealthier residents (half of the 1,000 apartments will be market rate) will drive affordable amenities out of their neighborhoods, and possibly drive NYCHA tenants out altogether.

Critics and many NYCHA residents are also deeply troubled by the idea of turning to private developers to save a public asset, especially under a Trump administration that heavily favors privatization. Giancarlo Fernandez, 29, lives in the Carver Houses in Spanish Harlem. "If someone is telling me to give a chance to developers, that this is what's going to fix NYCHA—when we have a developer in the White House making cuts to NYCHA," Fernandez said, "I don't see how that's a solution."

According to NYCHA, the 2017 loss is at least $27.7 million in operating funds, and $7.6 million in funding for the administration of the Section 8 voucher program.

While President Trump's first federal budget is forthcoming, the Department of Housing and Urban Development can adjust the formula it uses to distribute federal funds without approval from Congress. This year's cuts were reportedly made before Ben Carson was elected HUD Secretary, but appear to anticipate the Trump Administration's austere attitude.

NYCHA ended 2016 with a surplus of $21 million in operating funds—money that goes towards janitorial salaries, plumbing, electricity, mold and lead paint remediation, and other daily repairs. It is now at least $14 million in the red.

Residents will "immediately" feel the impact of the budget cuts in maintenance and individual apartment repairs, according to Olatoye. "Residents will see longer waits and reduced customer service," she said. Specifically, less repair work outside of the workday, since NYCHA "pays a premium" for maintenance on weekends and after hours.

South Bronx Council Member Rafael Salamanca on Monday recounted the trials of a NYCHA resident in his district with two small children. Her bathroom ceiling collapsed this month, after she made numerous requests to address leaks. "Here we are talking about the cuts that this president is going to do to NYCHA, and we can't even address the basic needs of our tenants," he said. 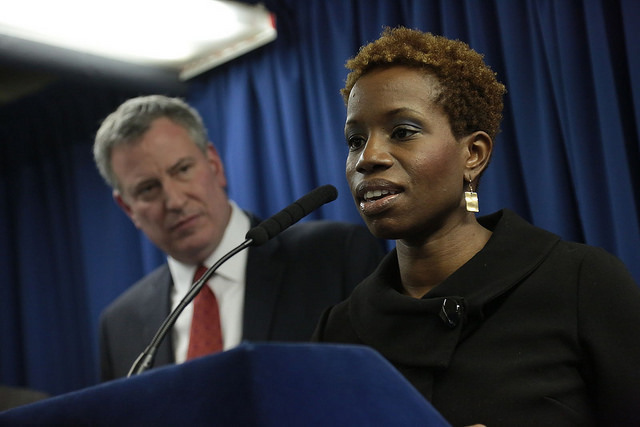 NextGeneration is intended to slough $4.6 billion off of NYCHA's $17.1 billion in unmet capital needs—through private development, as well as increased rent collection, administrative staff cuts, and commercial leases on NYCHA property. Some developments will be entirely below market rate, including those planned for the Ingersoll Houses in Fort Greene, the Van Dyke Houses in Brownsville, and the Mill Brook Houses in Mott Haven. Of the proposed 13,500 below-market rate units city-wide, 25 percent will be set aside for NYCHA residents, according to the city.

"Without the NextGen initiatives we've started to put in place, we'd be suffering deficits in the hundreds of millions every year," Olatoye testified. Additional sites will be announced this quarter.

But advocates say alternatives exist. Community Voices Heard, a grassroots economic justice group, is calling for $1 billion annually from the city, and, this year, $500 million from the state—a chunk of the stalled $2 billion Governor Cuomo set aside for affordable housing last year. Council Member Torres has also endorsed a 2014 proposal to dedicate surplus Battery Park City revenue to NYCHA—an estimate $400 million over a decade (Mayor de Blasio has maintained that the excess should go towards his larger affordable housing plan, not NYCHA specifically).

In January, de Blasio announced a $1 billion investment in NYCHA roof replacements over the next decade, on top of $300 million set aside in 2015. (Neither City Hall nor the Governor's Office immediately commented on the calls for increased funding; a NYCHA spokesperson said the roof investments were "historic," freeing up valuable resources for other capital repairs.)

Fernandez, the Carver Houses resident, said that the size of city and state contributions isn't his only concern: NextGeneration feels like an imposition. "We're told one thing and we're supposed to roll over and take whatever is handed down to us," he said. Fernandez's kitchen and bathroom have been plagued with black mold for years. "NYCHA residents want oversight of how this money is spent."

"We are going to be fighting with NYCHA in one sense, against the government, to say there should be no cuts to HUD," Community Voices Heard Director Afua Atta-Mensah told Gothamist this week. "But we will also be saying that now is the time to show that progressive policies can work."

Considering the magnitude of the cuts, Olatoye maintained, "We don't have the luxury of not doing some of these things."

"Of course we want people to have new kitchens and bathrooms and windows," she added. "Our abilities to keep up with those needs are nearly nonexistent."

[Update 2:15 p.m.]: Mayoral Spokeswoman Freddi Goldstein said that, "This administration has made unprecedented investments into NYCHA and will continue to support them as best we can." In addition to the roofs, she mentioned $180 million toward facade repairs, $55 million toward security lighting, and $70 million in waved NYPD security payments.

#federal funding
#nycha
#public housing
#section 8
#original
Do you know the scoop? Comment below or Send us a Tip