After a federal investigation recently revealed systemic neglect and misconduct in New York City's Housing Authority, the City agreed to pay an additional $2 billion over the next decade to help make things right. But that number is just a drop in the bucket of what NYCHA actually needs. A new capital assessment report from the City shows that the authority requires $32 billion in repairs and replacements over the next five years.

The report describes the challenges ahead as "staggering"—70% of NYCHA's buildings were constructed before 1969, and they house close to 5% of the City's population. More than 744 boilers have five years or less of usefulness. "Leaks and the resulting damage to walls and ceilings and, increasingly, the presence of mold are recognized by NYCHA management and maintenance personnel as very serious and pressing issues," the report states. Lead paint in NYCHA buildings has poisoned hundreds of children over the past six years.

Meanwhile, federal funding continues to shrivel up, and the mayor and the governor regularly fight over their own contributions. 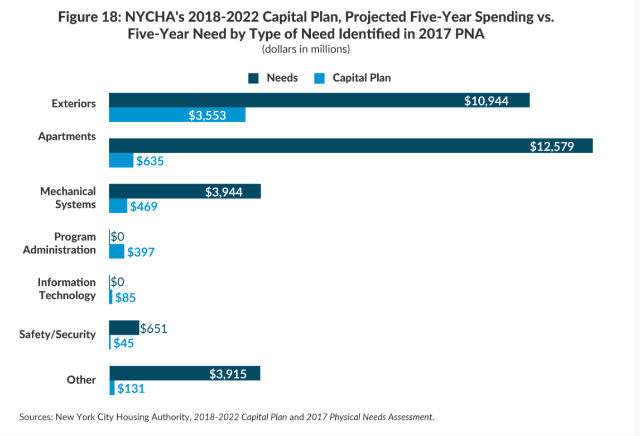 While NYCHA has already begun experimenting with generating revenue from private developers, the Citizens' Budget Commission recommends that the City go further and build 10,000 new affordable and market rate housing units on NYCHA land, in addition to selling off air rights and underused parcels.

The CBC also suggests that the City spin off NYCHA's senior housing to non-profits, and treat the remaining buildings as part of Mayor Bill de Blasio's affordable housing initiative, which would allow for several billion to be allocated for repairs and new construction.

You can read the CBC's entire report here.

#affordable housing
#lead paint
#nycha
Do you know the scoop? Comment below or Send us a Tip